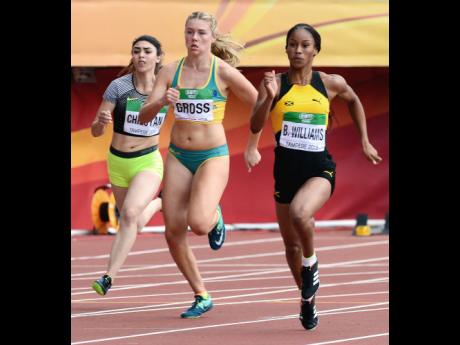 Collin Reid
Briana Williams powers to a win her 200m heat in 23.32 seconds at the IAAF World Under-20 Championships in Tampere, Finland. 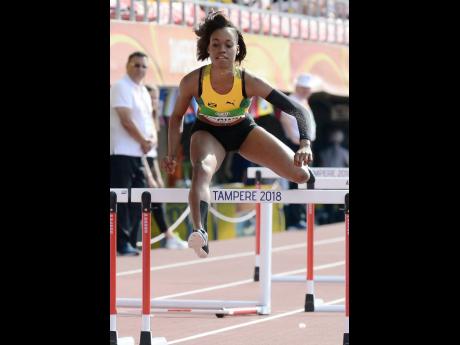 Collin Reid
Amoi Brown clears a hurdle on her way to winning her 100m hurdles heat in 13.49 at the IAAF World Under-20 Championships in Tampere, Finald yesterday.
1
2

Co-captains Shiann Salmon and Christopher Taylor both won silver medals, while Chantz Sawyers took home a bronze, as the country's young athletes picked up three medals on yesterday's fourth day of competition at the IAAF World Under-20 Championships in Tampere, Finland.

The country stayed on course to surpass the medal haul of two years ago, where they got eight medals as they are going into today's fifth day of competition with seven medals.

Taylor, who was expected to go all the way in the 400 metres, was upstaged by Belgium's Jonathan Sacoor, who ran a National Junior record of 45.03 seconds. Taylor went out very fast and had a five metres lead coming off the final curve, but was found wanting in the final stage of the race, as the strong finishing Belgian won comfortably in the end.

Taylor, who was suffering his first defeat of the season, ended second in 45.38 seconds as teammate Sawyers finished third for bronze in 45.89 seconds.

Earlier, female team captain Salmon, despite a stout-hearted performance, had to settle for second and silver in the women's 400m hurdles in 56.11 seconds.

The Hydel High athlete went out very fast and was neck and neck with favourite Zeney Van Der Walt of South Africa up to the half-way mark, but the World Under 18 champion, found an extra gear to score a convincing win in the end, taking the win 55.34 seconds. Yasmin Giger of Switzerland finished strongly for third in a season best 56.98 seconds.

The country will be hoping to pick up more medals on today's fifth day of competition with 100 metres female winner Briana Williams set to compete in the women's 200m final at 7:05 a.m Jamaica time.

Williams, who will be hoping to emulate Veronica Campbell's feat in 2000, when she won the sprint double in Santiago, Chile; won her semi-final yesterday in 23.41 seconds to be the second fastest qualifier behind the United States' Lauren Rain Williams, who won her semi in 23.15 seconds.

Intermediate male hurdlers Leanordo Ledgister and Malik James King will be involved in the men's 400m hurdles finals at 7:52 a.m. James King won his semi in 50.34 seconds yesterday and will run out of lane three, while Ledgister was third in his race in a personal best 50.13 seconds and will run out of lane two. In the field, Vere's Lamar Distin advanced to the women's high jump final, scheduled for tomorrow after her 1.82 metres effort where she grabbed the 12th and final qualifying spot.

Jamaica will only have one team in the 4x100m relay finals today as the women team was disqualified for lane violation. The men finished second in their heat in 39.68 seconds to be the fifth fastest qualifier.

Following first round action in the women's 100m hurdles yesterday, Britany Anderson and Amoi Brown will be hoping to advance to the final of the event, which is slated for tomorrow when they compete in the semi-finals at 5:55 a.m.