Siempre Bueno all the way 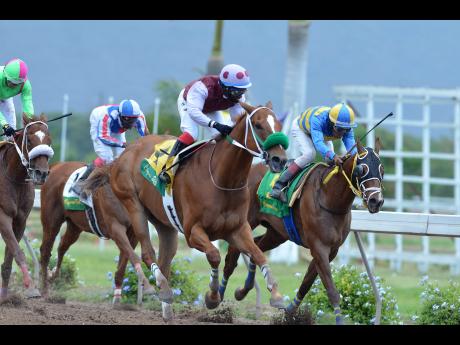 SIEMPRE BUENO has the draw to his advantage against MR UNIVERSE in this afternoon's five-furlong straight Reggae Trophy, a clash between the country's two fastest horses.

The pair met in the May 26 Lotto Sprint, at five and a half furlongs, and separated themselves from the field in a duel to the top of the straight.

MR UNIVERSE was up two classes for the Lotto Sprint in which he was the leadoff for Team Wayne DaCosta in a relay against Anthony Nunes' SIEMPRE BUENO, who stayed on better in the stretch run but was no match for DaCosta's closer, SHE'S A MANEATER, inside the last furlong.

Though he has youth and form on his side, mauling rivals by almost a dozen lengths a month later in the Racing Hall of Fame Stakes at six furlongs, four-year-old MR UNIVERSE is drawn at post position three with matching speed, SIEMPRE BUENO, breaking from post six and running three pounds lighter.

The draw is always critical in a five-straight race unless there is a lone speed. Even though the gate will be centred, taking MR UNIVERSE closer to mid-track, SIEMPRE BUENO should be able to keep DaCosta's speedster to his inside throughout the event, retaining the benefit of the track bias, which favours horses on the outside.

SIEMPRE BUENO showed in their only meeting that he can match his younger rival and have enough left in the tank. After getting rid of MR UNIVERSE, the six-year-old had raced two lengths clear a furlong out in the Lotto Sprint before SHE'S A MANEATER arrived.

MR UNIVERSE's stablemate, two-time Horse of the Year SEEKING MY DREAM, will break from post position one with joint topweight 121lb, taken out of his middle-distance comfort zone, and would have preferred at least another furlong and a half.