'I am excited!' - Fraser-Pryce already looking forward to 2019 World Champs after sub-11 run 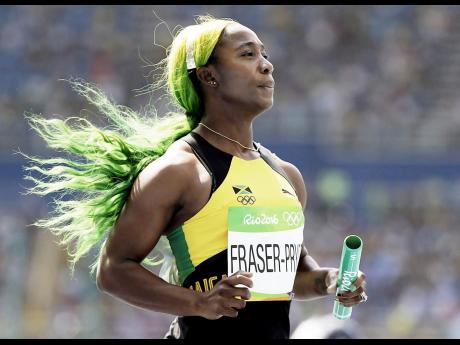 Like many onlookers in the athletics world, Jamaican sprinting star Shelly-Ann Fraser-Pryce was left pleased with her 100m run at the London Anniversary Games on Saturday, as the IAAF Diamond League made its way to the British capital.

It was a showing that has left her buzzing about the possibilities at next year's IAAF World Championships, set for Doha, Qatar.

Fraser-Pryce, a two-time Olympic champion and four-time individual gold -medal winner at the World Championships, dipped below 11 seconds for the first time since giving birth to her son Zyon last August.

Competing inside the London Olympic Stadium, the 31-year-old first clocked 11.13 seconds in slightly negative win (-0.4) to win her heat, before returning to the track to stop the clock at 10.98 to win the final shortly afterwards.

Her previous best this season was the 11.09 seconds she posted on her way to a second-place finish at the National Senior Championships last month and she had previously ran eight races with times ranging from 11.09 seconds to 11.52 seconds.

Fraser-Pryce was clearly satisfied with Saturday's performance and is now looking forward to continuing her improvements, as she prepares to return to championship competition with next year's World Championships in Qatar kicking off the next cycle of major global events, completed by the 2020 Olympics in Tokyo and the 2021 World Championships in Eugene, Oregon.

"Things are definitely coming along. I can't complain," Fraser-Pryce said after her race on Saturday. "It has been a long road, but at the same time, it has also been rewarding, because it continues to test my strength and ability to work my way back from having a child and being out so long, so I am really just pleased with the effort.

"I took the time off, I didn't pay any attention to what others said about my comeback. I continued to work hard ... and to come here and win, with my first sub-11, is fantastic," she added before noting that she was grateful for the double shift schedule at the meet.

"I was relaxed. I do better when I do rounds, because I am able to run my first round and get back and know where I went wrong and what I need to fix, so I am excited and happy that I had that opportunity," added Fraser-Pryce.

The sprinter, who is yet to consistently execute the bullet start that she is so well-known for, added that she is working to put all phases of her race together.

"It (start) will take some time, but it's coming. It's something that I am working on and I will continue to work on and, hopefully, before the season ends, I can put together a solid 100m," said Fraser-Pryce.

"Being a mother is my first priority and to come back and be flexible with my training is wonderful, and I'm so excited about next year now," she added.