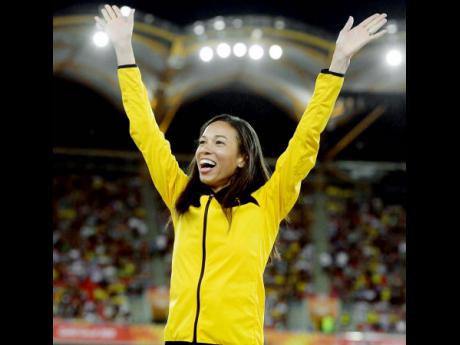 Collin Reid
Jamaica's Aisha Praught-Leer celebrates at the medal presentation ceremony after winning gold in the 3000 metres steeplechase at the 2018 Commonwealth Games in Gold Coast, Australia, earlier this year.

Aisha Praught-Leer continued her amazing 2018 season by breaking her national record in the women's 3000 metres steeplechase at IAAF Diamond League final in Brussels on Friday. She believes it has positioned her to do well next season when there will an IAAF World Championships.

Praught-Leer, who won gold at the Commonwealth Games earlier this year, lowered the previous mark by five seconds when she registered 9:14.09 for eighth in the race for the Diamond League trophy in her event.

"I am very happy to get a personal best last night (Friday night) and, hopefully, I can improve again at Continental Cup, but it is exciting to be finishing the season well because it puts me in a very good position for 2019," Praught-Leer said.

The 28-year-old said she has learnt a lot about setting targets and meeting them this season, as she has smashed her two main objectives of winning at the Commonwealth Games and qualifying for the Diamond League final.

"I think we did a good job of setting targets and meeting them this year, and so, we will approach next season with a lot more confidence that we can continue to do the same," Praught-Leer said. "Coming into the season, the objective was to win at Commonwealth and make it to the Diamond League final - because I just missed out (On Diamond League final) last year."

She continued: "It was difficult to achieve both because it meant that I had to split the season into two. It started with World Indoor (Championship) and then Commonwealth, and then after that, I had to take a little break and come back and train hard to make it to the Diamond League final."

Having achieved her two main objectives of this season, Praught-Leer now sets her sights on breaking into the top five in her event.

"I wanna be top five at Worlds (World Championships) and that means that I will have to take off another four seconds off my personal best. But I want to be able to race with the Kenyans and get use to their aggressive pace," Praught-Leer said.