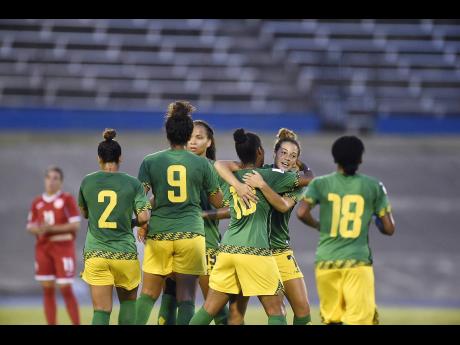 Jamaica's senior women's football team made it four wins in as many games with a 6-1 thrashing of neighbours Cuba in the CONCACAF Caribbean Women's Qualifiers at the National Stadium last night.

The Jamaicans came into the game high on confidence after winning their previous games against Antigua and Barbuda, Bermuda, and Trinidad and Tobago 9-0, 4-0 and 4-1 respectively and had already advanced to the final CONCACAF round of FIFA Women's World Cup qualifying. However, they were looking to continue that momentum to not only ensure they win the group outright, but send a message to their upcoming opponents in October.

The Reggae Girlz had a dominant first half and almost scored in as early as the seventh minute when midfielder Chinyelu Asher played a pass left to Jody Brown. Brown made her way down the left side of the area at pace and played a cross inside that drifted closer to the goal than she expected, however it narrowly missed the far post and went behind for a goal kick.

However, the floodgates opened in the 19th minute when Trudi Carter switched over from her wide right position to the opposite side of the field to confuse the Cuban defence. She cleverly cut the ball back to Asher, who was arriving just at the edge of the area. Asher took the ball on her left foot and hit a powerful shot which went in off the post to make the score 1-0.

In the 32nd minute, left back Lauren Silver scored, curling a well taken free kick from just outside the box on the right side of the Jamaica attack. The ball flew above the crowd in the area and into the back of the net with Martinez left rooted to her spot. Two minutes later, 3-0 became 4-0 when Brown converted a penalty.

Minute 38 saw the Jamaicans take the lead to 5-0 when Asher crossed the ball into the box for Shaw, who shook off Cuban captain Mena, to head beyond Martinez into the net with ease for her eighth goal of the competition.

The second half saw Jamaica dominate possession and also miss a number of easy chances. One of these came in the 67th minute when Shaw toyed with her marker down the right side, twisting and turning to put her off balance before looping a ball across the face of goal. It came to Brown, who was standing unmarked at the backpost, but she somehow managed to put her free header wide.

Three minutes later, captain Konya Plummer, a center defender, went on a mazy run into the box, beating four defenders in the process. She played the ball along the floor across the area and Maristania Mengana tried to clear for Cuba but put it straight into the path of Asher. Her resulting shot was weak but still trickled beyond Martinez.

The Jamaican switched off after going up 6-0 and in the 93rd minute, with the last kick of the match, Cuba's Maria Perez carried the ball into the box and finished low and hard at Jamaica goalkeeper Sydney Schneider's far post to get their consolation.

Jamaica won the match 6-1 and were crowned Caribbean champions, scoring 23 goals while conceding only two in the process.

They now focus on the final round in the United States this October.