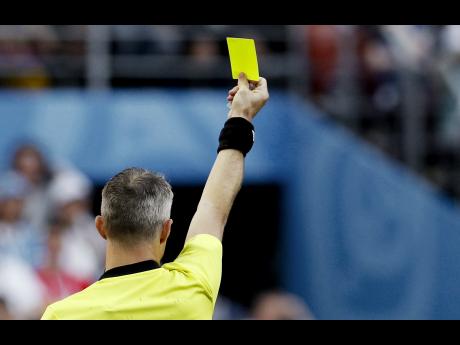 File
A referee shows a yellow card during a match at the recent FIFA World Cup.

Victor Stewart, manager for the referees department at the Jamaica Football Federation (JFF), has admitted that he is struggling to provide enough officials to man the upcoming schoolboy football and men's and women's premier league seasons.

But he promised that this will be the last year his department will face the situation as he is about to go a on a massive recruitment campaign throughout high schools across the country.

"We are in discussion with the Inter-secondary Schools Sports Association (ISSA) to speak to schools who are affiliated with them to start a junior programme within the schools and attract people to the product. We have 130 schools playing Manning and daCosta Cup this year. And if we have one referee from each school then we would be good," Stewart said.

"We are talking about 18- and 19-year-olds. They have a lot of potential. At 25, they would be ready for the FIFA list if they matriculate."

The former FIFA referee said that he is hoping to begin this new recruitment programme by next month.

"By mid-October we hope to kick-start the schools programme and I am really pushing because I don't want to run in the same problem we are having now, next year," Stewart said.

According to Stewart, his department and ISSA, which manages secondary school sports in Jamaica, had to reschedule a number of Manning and daCosta Cup games in order to be able to stretch his 210 registered referees for both competitions, the Women's Premier League and the Red Stripe Premier League.

"ISSA will be rescheduling some matches to accommodate us. I have personally been in contact with George Forbes and we are working together to ensure that all games are serviced. With the working collaboration, we will be able to service all competitions. The major part of the competition is actually the first round and once we get through that ,we will be good," Stewart explained.

In order to prevent a recurrence of the issue, Stewart has devised a number of strategies to remedy the problem.

"The responsibility for recruiting referees lies with the referee's department of the JFF and that is one of our mandates. We have just matriculated 18 referees in St James and we have extended the same principles for the other parishes as well. We have asked the parish president and past referees to identify personnel within the parishes and we will go in and train them."