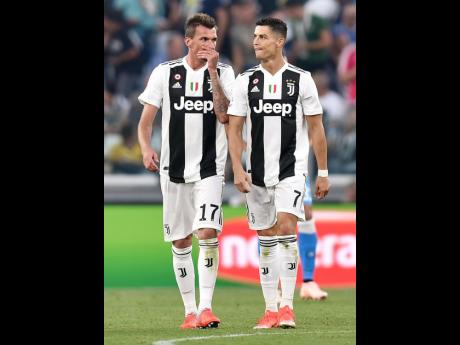 AP
Juventus' Mario Mandzukic (left) talks with his teammate Cristiano Ronaldo during the Serie A match against Napoli at the Allianz Stadium in Turin, Italy, yesterday.

Cristiano Ronaldo was hired by Juventus for his scoring fame. In the absence of goals, though, his influence knows no bounds.

Yesterday, Ronaldo set up all three of his side's goals - two for Mario Mandzukic and one for Leonardo Bonucci - as Juventus beat 10-man Napoli 3-1 in Serie A.

In seven league matches so far, he has five assists, compared to three goals.

It's not quite what Juventus or Ronaldo ordered, but he and the team remain perfect on the domestic front going into his enforced rest in Tuesday's Champions League match against Young Boys following his red card at Valencia.

"Ronaldo is having fun and doing well," Juventus coach Massimiliano Allegri said. "Tonight, he played his best match with us ... we have to be better in picking him out."

Juventus' bid for an eighth successive Serie A title looks even more unstoppable.

Napoli pushed Juventus all the way last season in the most exciting title race in recent history, but the Bianconeri clinched the title despite being beaten at home by Napoli late in the campaign.

They already have a six-point lead over Carlo Ancelotti's team, which again looks set to be their closest challengers.

Napoli took only 10 minutes to take a deserved lead. Allan picked out JosÈ CallejÛn, who found Dries Mertens with a delightful volleyed pass, and the Belgium international slotted home.

Juventus levelled after a great bit of skill from Ronaldo on the left saw him befuddle Elseid Hysaj and put in a cross for a Mandzukic header.

Juventus completed the turnaround four minutes after the break. Ronaldo's effort came off the left post and Mandzukic turned in the rebound.

Napoli's night went from bad to worse in the 58th when defender Mario Rui was sent off for a second yellow card.

Juventus capped the match 14 minutes from time. Ronaldo's glancing header from a corner came to the far post where Bonucci was sliding in to score his first goal since his return from AC Milan in the off season.