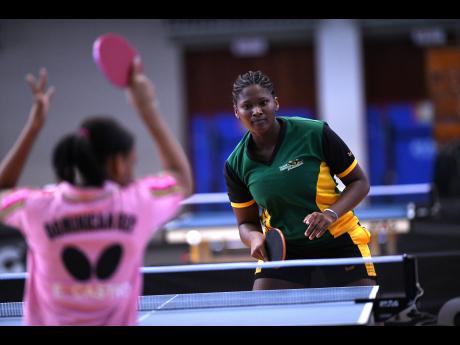 Jamaica's female table tennis players need overseas exposure if they are to keep pace with their rivals in the region.

That's the observation of Matthew Dawson, who was national women's team coach during the recently concluded 60th Caribbean Table Tennis Championships in Kingston. Dawson noted that players from other islands play overseas and believes Jamaica must do the same.

With the last two Jamaican champions, Yvonne Foster and Shenique Clare, not on duty, Jamaica fielded a team of teenagers at the championship. Two of them, Dadrian Lewis and Brittany Murray, are sixth formers and this pair had represented the senior team in the past. The other two, national Under 15 and 13 champion Solesha Young, and 2016 Caribbean Under-11 runner-up Kelsey Davidson are just 14 and 13 years old respectively.

Jamaica finished third at last year's tournament but missed the medals this time.

Speaking inside the National Arena just after Jamaica's 3-2 win over Martinique, Dawson said: "This was a close match but we have an extremely young team, all players Under 21 and some still Under 15, so the thing is that I'm hoping the country will find the will to keep them in training for two to three years and have them tour like the other Caribbean islands so we can reach the pinnacle that they want to reach."

Many of the region's best campaign overseas, some as members of foreign clubs and others as student-athletes in the United States. At number 33, Puerto Rican teenager Adriana Diaz is by far the highest world ranked Caribbean player. She played and trained in China last year and this year, she represented an Indian club. Not yet 18, Diaz is this year's Central American and Caribbean Games winner.

Mindful of such information, Dawson said of his young team: "Without outside experience, they'll be in trouble." he concluded, "We can't stay home and win and beat these people."

In the women's singles last week, Murray, Davidson and Larissa McLaughlin all made it out of the qualifying round and into the main draw, with Lewis getting to the main draw of the Under-21 singles where she lost to eventual senior champion Yasiris Ortiz of the Dominican Republic, world ranked at 236.