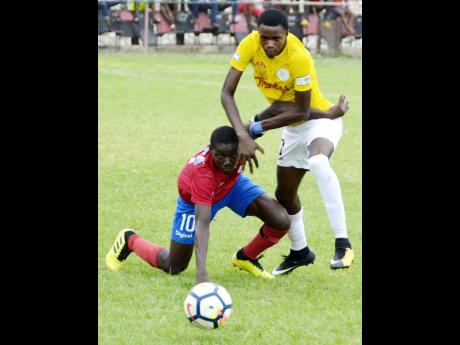 But despite winning the group easily, coach Christopher Bender believes that his side is yet to play their best football.

"The team has not played the best football yet. We have not played up to our potential, and so we are going to work on it until we get it right," Bender told The Sunday Gleaner.

"Our best midfielder didn't play today, and we believe when he is back, we will be able to pass the ball around more and create more chances," Bender said.

Shaqueil Bradford put the blue and red-clad school in front in the 31st minute, but a goalkeeping error enabled Charlie Smith to level the score after the break and cement Trench Town-based school's spot in the second round.

"Our goalkeeper made an error today, but we will not quarrel with him. We will look at it as a learning experience and move on," Bender said.

It was the second time that the two schools were sharing the points this season. Their first-leg encounter finished goalless.

"From the fixtures were released, we realised that they would have been our toughest challenge, and it proved true as we drew on both occasions," Bender said.

Now on 23 points, the east Kingston-based Camperdown are five clear of Charlie Smith.

But the huge gap does not bother Eugene Williams, the coach of Charlie Smith, as according to him, his side is still in contention to deliver a trophy this year.

"They won the group, but we are not disheartened because we are still in a position to win a trophy, which is our objective this season," Williams said.