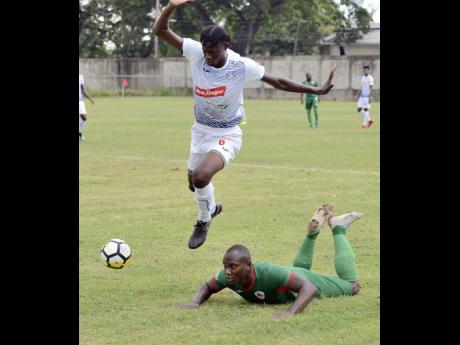 Ian Allen
Portmore's Chavaney Willis (left) is forced to leap over Michael Binns after the Humble Lion man put in a heavy challenge on him last Sunday.

Defending champions Portmore United and semi-finalists Cavalier will this afternoon meet in one of the most keenly anticipated games of the 2018-2019 Red Stripe Premier League (RSPL) season.

Neither team has had their best start the season. Portmore United started out losing on the opening day to the promoted Mount Pleasant before rebounding to defeat Harbour View, and only last week, played to an unexpected draw with Humble Lion. Cavalier, on the other hand, stopped Reno and Arnett Gardens in impressive fashion before falling to UWI FC in a surprising result. Both will be looking to get back to their authoritative best.

"It is a big game in terms of us sticking with the pack and putting points on the board," Portmore United's Shavar Thomas said of today's game.

"There will be two good teams out there. They are a good tough bunch, and you can expect us to go out there and put on a good show as we did last season," Thomas added.

For Cavalier's Rudolph Speid, this is the perfect match for his charges and football lovers.

"This is the match that I am really interested in. It features two teams that are very similar in their philosophy in that they develop and feature young talent and play the game the way it should be played," Speid gushed.

He added: "Today's game is almost like a tie-breaker between us as last year, we played four times. The first we won 3-0. The other two were drawn, and we were beaten 3-0 in the semi-finals, so this is really like a decider and one that people should want to see"

Despite not looking their sharpest on a consistent basis so far this season, Thomas expects the best to come to the fore shortly.

"Everybody is good. The players are ready to go. We knew from the start that everyone will seek to play us like a final. We are going to take it one step at a time and build on what we want to improve on," explained the former national defender.

For Thomas to get best out of his team, the likes of captain Ricardo Morris, Jovan East, Damono Solomon, goalkeeper Kemar Foster and company will have to be at their best. Speid will look to captain Chevone Marsh, Alex Marshall, Nicholas Hamilton, and Kaheem Parris.

At Frome, Reno will try to get their season back on track when they host UWI FC while the struggling Harbour View will look to bounce back from last week's mauling at the hands of Waterhouse when they entertain Montego Bay United.

Humble Lion will need all the encouragement they can get from the point they earned from the draw they had with Portmore United when the very hot Waterhouse visit. Mount Pleasant have fared the better of the promoted teams and should be fancied to get the better of Dunbeholden when the two meet at Drax Hall.