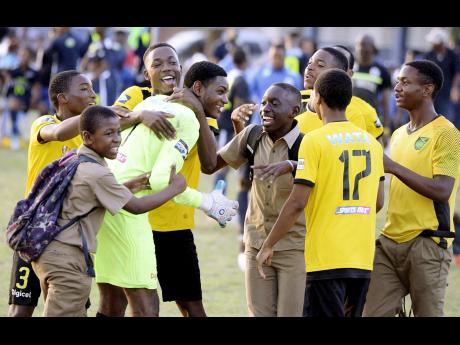 Jonoy Cunningham stunned the home crowd when he fired his team into the lead after only three minutes. But on the first attack after the break, Javain Thompson, restored parity for the host.

But as JC pressed for the equaliser and wasted chance after chance, Kingston Technical received a free-kick 30 yards away from goal and Williams, who had kept the champions at bay with his astute positioning, safe hands, and important saves, and had demonstrated throughout the match that he has a very strong kick after launching spot-kick after spot-kick into the opposing penalty area or to a teammate deep in the JC half, stepped up did what hundreds of outfield players had failed to do since 2012 - score the winning goal against JC.

However, the 17 year old shot stopper did not go for a strong kick, but hit a precise ball over the wall, out of goalkeeper Derland Hyatt's reach, into the near-post before rippling across the net and settling into the far side. Williams, who represented Seaview in last season's Kingston and St Andrew Football Association Major League but recently transferred to Santos, said he has been practising the technique he used to score for months, and was proud to have helped his school end JC's longstanding unbeaten streak.

"I told my team that today (Monday) we are going to create history, and we are going to (end JC's run). I feel so good to make my school, my coaching staff, teammates and schoolmates that came out to watch us and have faith in us, proud.

It was a joy to put that ball in the back of the net and finish off the game," he said."It is a technique that I use to kick the ball. I was home practising for weeks, months and I'm always begging coach.

I scored a penalty last season against Vauxhall and this is the third free-kick I am kicking in this Manning Cup, but this is the first goal I am scoring and I feel wonderful. I am just going to go home and watch the television and enjoy what I did," he commented.

Williams says the team will now go for three points in their last game of the group against Campion College on Saturday, and see if they can qualify as one of the best third placed teams. JC head coach Andrew Peart said the defeat will only serve as a motivation in the defence of their title.

"We played excellently but never managed to put away the chances we got, but Kingston Tech got two chances and put them away. We are really disappointed to lose but we have to move on. This will only inspire us to go on to greater things," he said.