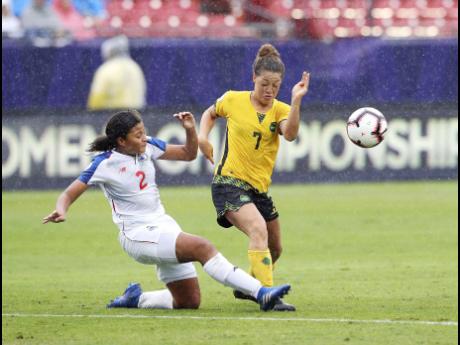 AP
Panama defender Hilary Jean (left) makes a tackle on Jamaican midfielder Chinyelu Asher during the first half of the third-place match of the Concacaf women's World Cup qualifying tournament, on Wednesday. Jamaica won 4-2 on penalties after a 2-2 scoreline to book a spot to next year's FIFA Women's World Cup. 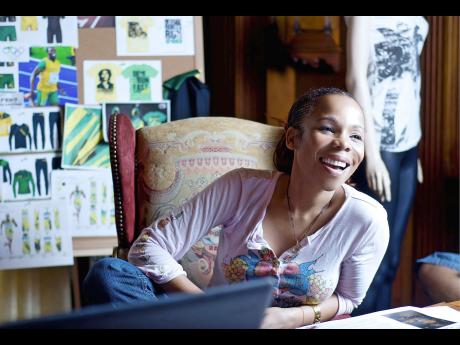 Cedella Marley, national senior women's football team ambassador and daughter of reggae legend Bob Marley said that the Reggae Girlz's qualification for the FIFA Women's World Cup in France next year will have a positive impact on women's football, not only in Jamaica, but also across the Caribbean.

Marley, Chief Executive Officer of the Bob Marley Foundation, a non-profit organisation which began sponsoring the Reggae Girlz in 2014, after their six year hiatus from football due to lack of funding, was a guest on the BBC's News Hour yesterday. She said qualification will inspire girls across the region to believe in achieving their dreams.

"There's a Jamaican saying: 'Wi likle but wi tallawah,' Marley said. "We might be small as a country, but our strength is, of course, in our people and our qualities that we have. I think every little girl that's in some school in the Caribbean that has a dream of doing what we saw happened (on Wednesday) night, now knows that it can be true - it is true."

"It has become a reality. Four years ago, I said this is like a Disney movie waiting to be made. Hopefully some body's writing the script. Jamaican women don't cry. We smile and we laugh and we go through but (Wednesday) night, I did shed a tear," Marley added.

Marley said that her father would be proud to see her contribution to the team's success if he had still been alive today.

"He would be very proud of the women's team," she said. "My father probably would not expect anything less from me. My mom, she keeps me so focused and determined and all she has to do is give me a nod and I'm off running, so I'm grateful for both parents."