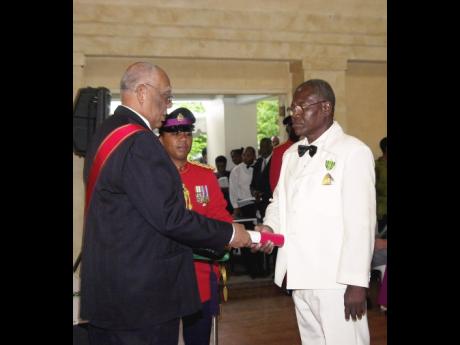 Ricardo Makyn
Governor General Sir Howard Cooke (left) presents George Leslie "Bunny" Grant with the Order of Distinction in the rank of Officer for his contribution to sports at the Ceremony of Investiture and Presentation of National Honours and Awards at Kings House on Monday, October 17, 2005.

Grant died at his home yesterday after suffering a second stroke last week, his son Junior Grant told The Gleaner.

"He was ill for some time. He had a stroke a few months ago and then he had a stroke again last week and he died today (yesterday)," Junior Grant said. "He also lost his sight in the last couple of months too."

Junior Grant said he wants his father to be remembered as a person who loved boxing and gave his all to the sport.

"He really loved the sport. I remember last year we took him to a gym and he was so excited to teach the young boxers," Grant said. "I hope they continue to grow the sport locally because he would have loved that."

Stephen Jones, president of the Jamaica Boxing Board, said Bunny Grant did a lot for boxing in Jamaica.

''Bunny Grant not only set the tone for boxing locally, but having competed at the highest level for a WBA world title fight, he set a bar that Jamaican boxers past, present and future have and will continue to aspire to. His passing definitely comes as a blow and our condolences go out to his family," he said.

"We will forever remember his victory over Dave Charnley, the Commonwealth lightweight champion, at the National Stadium on August 4, 1962 - just two days before Jamaica's Independence Day. The happy impact of that victory on the entire country is a feeling I can never forget," she said.

"Bunny's passion and humility endeared him to all. We all followed and celebrated with him throughout his 19-year career. Each of his victories was a victory for the Jamaican people," she added.