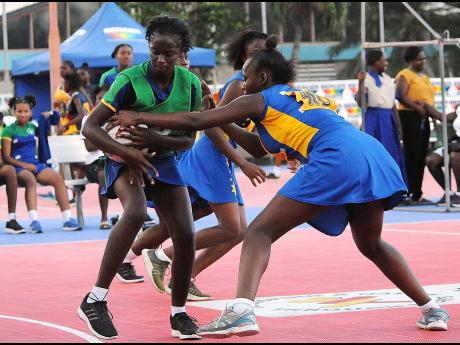 The top-of-the-table Group One junior and senior clashes between Gaynstead and St. Catherine High in the second round of the Urban ISSA Schoolgirl Netball Competition at the Leila Robinson Courts on Tuesday was anticipated to be close going.

In the end, it was anti-climatic, as the Dalton Hinds-coached Gaynstead teams had easy wins in both matches.

The junior match was a repeat of last year's finals when the Phyllis Thompson-coached girls surprised their opponents and with both teams coming off two good wins, an epic battle was expected. At the start it was Gaynstead that stole the early initiative, as they raced into a 3-0 lead with their tall players enjoying early dominance over their smaller opponents. However, the Spanish Town-based team rallied midway the quarter to be behind by one goal 6-5, before Gaynstead regained their early advantage to end the first quarter 9-6 in front.

St Catherine came into their own in the second quarter, and it was very competitive here as they went toe-to-toe with Gaynstead, and at one stage, the scores were tied 15-15. However, careless turnovers by the St. Catherine players allowed their opponents to seize the advantage in the latter stage to take a three goal lead into the half-time break 19-16.

Gaynstead, with the agile and deceptive Goal Attack Dejanay McIntosh running riot, took full control of the next two quarters, leading 28-22 after the third stanza, before commanding a 13-6 advantage in the final quarter for comprehensive 41-28 win in the end.

Despite the loss, Thompson was still optimistic about the chances of her team advancing to the semi-finals.

"We will just have to go and do our homework and see what changes we have to make. My team is a little bit weaker than last year because we lost our goal attack to the senior team but nevertheless, I thought the hot conditions played a great part where the flatness of the players were concerned, but we will come again," said Thompson.

Long-time manager of the Gaynstead team Derrick 'Pastor' Brown was happy his team was able to avenge the defeat they suffered in the final last year.

"We were expected to win, but we didn't know it would have been that easy. It is not really revenge for us as this is not the final and it is possible that both teams can meet in the finals," said Brown.

Like their juniors, Gaynstead's seniors remained unbeaten, as they raked up their third win in a row to stay on top of Group One with six points. The victory is likely to have them avoiding favourites Excelsior High in the semi-finals.

The Christopher Smart-coached Excelsior team also made it three from three in Group Two to stay on top with a 40-28 win over former champions The Queen's School.