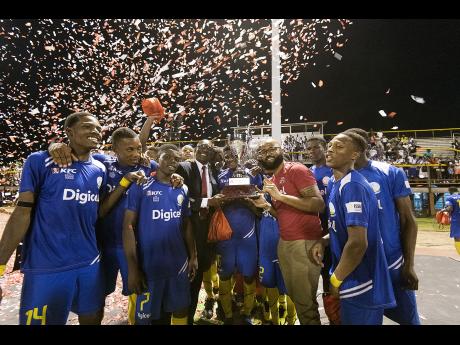 Hydel coach Corey Bennett said the team was fuelled by those who saw them as pushovers.

"Many persons were talking before the game, saying is we dem want, dem get di right team. Well, I hope dem belly full now, two love" he said with a smirk after the game. "We're not showing off. We let the ball do the work. We had a poor first half. Half-time helped us. We went and spoke to the guys. We asked the boys in their last year of competition to really give a good 45 minutes, and we give God thanks for the goals that came."

The game was a hot-tempered one from start to finish, with tension both on the field and in the stands between both schools. Hydel had more possession of the ball in the first half - but Excelsior had the more meaningful chances. However, that was to change in the second half.

Hydel's first goal came in the 74th minute when Jordane Cameron got by Excelsior's Tajhay Williams, who mistimed his tackle. Cameron also left Joseph Greenwood on the grass, but his shot was blocked by Excelsior keeper Javaughn Bhalai. The rebound fell to Fakibi Farquharson, who calmly finished from just inside the box.

Excelsior kept up their pressure but could not make it count. Against the run of play, in the third minute of second-half stoppage time, Davis played a long ball downfield, which found DeAndre Walker. He made no mistake, tucking beyond the onrushing goalkeeper to double the lead. Excelsior's frustration became evident when one of their players received a hard tackle by a Hydel player, resulting in a brawl between the two teams. Excelsior's captain Rohan Beadle was then sent off by referee Steffon Dewar.

Having won the trophy in the school's 25th year of existence, Bennett said that he hopes it becomes a catalyst to spur the school on to greater successes.