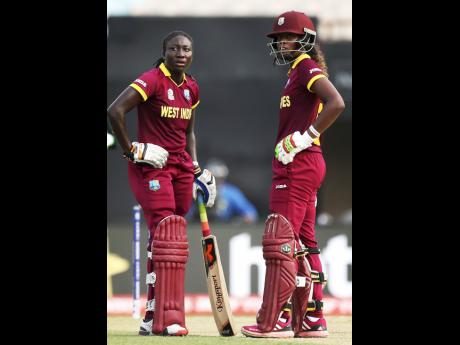 Choosing to bat first at the Darren Sammy Cricket Stadium, the reigning champions stormed to 187 for five off their 20 overs - their highest-ever score in T20 Internationals and the third highest in a T20 World Cup.

The 20-year-old Matthews was at the centre of the Windies domination, stroking a classy 62 off 36 balls while opening partner Deandra Dottin slammed 49 from 35 deliveries and captain Stafanie Taylor, an attractive 41 from 25 balls.

In reply, Sri Lanka crumbled under the weight of the imposing run chase and were dismissed for 104 in the 18th over, with captain Chamari Athapaththu top-scoring with 44 from 35 deliveries.

Matthews, with her first bowl of the tournament, claimed three for 16 as Sri Lanka collapsed from 88 for four in the 13th over, losing their last six wickets for just 16 runs.

The victory ensured the Windies remained unbeaten in three outings and also propelled them top of Group A on six points. England who had earlier beaten South Africa by seven wickets, also secured the other semi-final spot in the group ahead of Sunday's clash with the hosts.

Having barely scraped past 100 in both their previous matches, West Indies turned on the style in front a crowd of nearly 7,000, as they tuned up nicely for the all-important semi-finals next week.

Matthews, with scores of six and eight in the tournament, found her touch in an innings that contained eight fours and two sixes. She was the catalyst of an exciting 94-run opening stand off 58 balls with Dottin who lashed eight fours before barely missing out on a half-century.

The right-handed Matthews reached her fourth T20I half-century off 25 balls - the second fastest of the tournament - before scooping pacer Oshadhi Ranasinghe to point in the 10th over.

Dottin then took over, keeping the scoring ticking along in a 33-run, second wicket stand with Taylor who struck four fours and two sixes en route to passing 7,000 career runs in both T20Is and one-dayers.

With a 10th career half-century in sight, Dottin was leg before wicket playing across a straight one from left-arm pacer Udeshika Prabodhani in the 13th over, leaving Taylor to marshal the innings.

She did so with aplomb, striking four fours and a couple of sixes before holding out in the deep in the final over off off-spinner Shashikala Siriwardana.

West Indies kept the pressure on from the outset of the Sri Lanka reply, seamer Shakera Selman bowling Hasini Madushika leg stump for 10 in the third over and Kavisha Dilhari run out for five at the non-striker's end in the sixth over, following hesitation over a quick single.

Taylor had Siriwardana holing out to Chinelle Henry at mid-off for six in the eighth over before Eshani Lokusooriyage followed for eight in the ninth over, bowled missing a heave at seamer Dottin at 56 for four.

Athapaththu kept hope alive for her side, hitting seven fours in a breezy 35-ball innings as she added 32 for the fifth wicket with Nilakshi Damayanthi (11).

However, Matthews claimed Damayanthi and Ama Kanchana (0) in successive deliveries at the end of the 13th over and triggered the final slide for Sri Lanka.