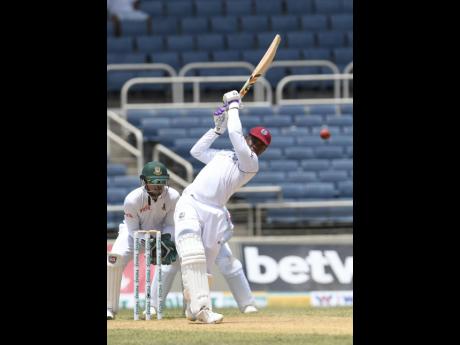 Randy Brooks
Windies batsman Shimron Hetmyer (front) plays a lofted drive on the third day of the second Test match between the Windies and Bangladesh on Saturday, July 14, 2018 at Sabina Park. Hetmyer also featured in the Windies' 64 run loss to Bangladesh at the weekend.

Bangladesh coach Steve Rhodes has defended the turning pitch in last week's opening Test against the Windies, contending that the varying types of tracks around the world helped maintain the "intrigue" of Test cricket.

Spinners grabbed 34 of the 40 wickets to fall at the Zahur Ahmed Chowdhury Stadium as the Windies plunged to a shock 64-run defeat inside three days - their first-ever loss on Bangladeshi soil.

Set 204 to win, the Windies were bundled out for 139 in 35.2 overs, with left-arm spinner Taijul Islam snapping up six wickets.

Rhodes said the first Test scenario was no different from the conditions Bangladesh faced on their tour of the Caribbean earlier this year, when they were bundled out for a record low 43 on the first day in seam-friendly conditions.

"I think in the subcontinent, you come to expect turning wickets, so it is no surprise. It is a turning wicket in Colombo where a Test match is going on between England and Sri Lanka," Rhodes pointed out, in reference to the third Test which ended Monday.

"It is just a different type of wicket. I take you back to the Antigua Test, where we played on very alien conditions: green and bouncy, a swinging Duke ball, which nipped around a lot. It was very different.

He added: "I think that's the beauty of playing around the world. There's lots of different ways of playing this wonderful game. Coming to Bangladesh and playing on different wickets did make [for] some intriguing cricket.

"When you feel a little bit worried about getting out [on a turning pitch] , you tend to play in a manner that is a little bit counter-attacking.

"Sometimes that looks like rash batting for Test cricket. But it is the pressure that you are being put under and you're trying to make that bowler not bowl as well. You counterattack a little bit."

To further underscore his point, Rhodes was quick to praise 21-year-old Shimron Hetmyer, who was perhaps the best Windies batsman on show.

The aggressive left-hander counter-attacked the Bangladesh spinners in both innings, smashing 63 from 47 balls in the first innings and 27 from 19 deliveries in the second.

"I thought Hetmyer's innings was very interesting. He counter-attacked us," Rhodes noted. "I was so glad to see him gone in the second innings. He could have caused danger if he lasted an hour."

The Windies face Bangladesh in the second and final Test starting Friday in Dhaka with the prospect of another turner being prepared for the contest.