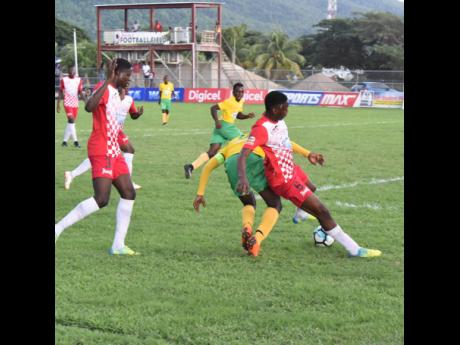 Shackeil Fuller (right) of Charlemont shields the ball from Petersfield High Schools Shewayne Barton while his Charlemont teammate, Tajuan Wright, looks on in the final of the ISSA/WATA Ben Francis Knockout Cup at the Juci Patties Park in Clarendonon November 23. Charlemont led 2-0 at halftime when rain interrupted play.

Marlon Martin, captain of Charlemont High School's senior football team, said he wants to dedicate the ISSA/WATA Ben Francis Knockout Cup title to his mother, who was laid to rest on Saturday.

Charlemont led the Ben Francis final 2-0 over Petersfield High School at the Juici Patties Park last Friday before a waterlogged field brought a premature end to the game at the halfway mark. The game is set to resume at the same venue today at 3 p.m.

"She always motivated me when she was alive, so I would want to win the Ben Francis Cup for her because I know she would be proud," said Martin.

Despite a two-goal lead, the game is not yet settled as Petersfield evenly matched Charlemont in attack last week and conceding an early goal will change the complexion of things.

Martin, who was not part of the starting eleven on Friday, is expected to feature off the bench today as Charlemont look to manage the game to win their first piece of silverware. He told The Gleaner he is aware of what they need to do as a team to close out the game but also pointed out that he wants to score in his mother's memory.

"I would feel really good to know that she passed and I still won a trophy," said Martin."

Yes, we are leading 2-0, but [we] still have another 45 minutes to play. We will have to work hard the same way to ensure we secure it come Tuesday."

"I want to come on, score, and get the Man of the Match award again like in the semi-final, where she had only passed three days before," he added.