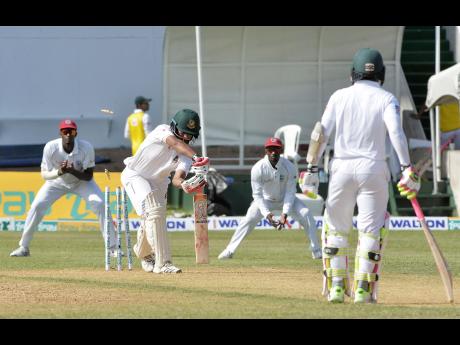 Ian Allen
Batsman Nurul Hasan (left) is bowled by Keemo Paul for his fist Test wicket on the second day of the second Test match between the Windies and Bangladesh at Sabina Park on July 13, 2018. Looking on is Devon Smith (second right). The teams are currently playing in Bangladesh, where the Windies suffered a 64- run defeat in the first Test at the weekend.

As I watched the Windies men's cricket team crash to another defeat, and agonised at the meltdown of the ladies playing in the semi-finals of the ICC Women's World Twenty20 (T20) competition, an article published in the Daily Gleaner, 'Asses and assets' became relevant. The author is quoted as saying: "When Government officials sidestep the right people for the job and put their asinine cronies in management positions, which are above their competency levels, guess what happens?

When lower-level government employees are forced to grapple with corruption and incompetence from above, guess what happens. Mounting losses, procrastination and delays, exacerbated opportunity costs, low morale, and reduced productivity within government. Asses cannot manage assets."

In sports in the West Indies, I have seen no evidence of corruption, but incompetence and mismanagement. I can fill many column inches with examples. I have recognised the innate talent of Jamaican and, indeed, West Indian sportsmen and sportswomen. However, there is an ever recurring problem when it comes to getting the right team together, and if and when the right team members are selected, the incompetence of those managing the assets is laid bare.

The Windies Women T20 team has not been having a good year of competition. So there was little expectation of our ladies winning the World Cup, currently taking place on 'home' soil. But once the competition started, the grit, determination and tactical nous of our ladies filled our collective hearts with joy and hope. Then, after systematically defeating all that came before our ladies, in the semi-finals, the coach and captain (according to the captain) decided that batting first, with all its success in the previous matches, was not the way to go. Give the Aussie ladies the opportunity to bat first, put up a fighting total, and then let our ladies, who have not been batting well for the whole tournament, go out and chase! Ugh! Guess what happened. Asses cannot manage assets. Those in charge of managing the assets of our senior men's cricket team use every opportunity to tell us how well they have been doing, while the team slides relentlessly down the ranking of world cricket. Bangladesh beat us in two and a half days! How good a job is that? Has Trumpian philosophy been transported here?

In schoolboy football, Jamaica College have proven themselves to be the kings of inter-school competition. Champions year after year. A new coach takes over, and as the season reaches the interesting and vital stages of the different competitions, the team is out-coached when the results really matter. Yet, when asked, members of the management team insist that nothing will change.

Apparently, 2018 was just a bad year, notwithstanding that the effort and resources put into the preparation this year has come to naught.

We are too blessed with sporting talent to be stressed with these kind of defeats. Those placed in charge of our sportsmen and sportswomen MUST be given a programme of goals and aspirations, with the certain knowledge that failure WILL result in termination. If not, we will be constantly turning the corner or going back to the drawing board.