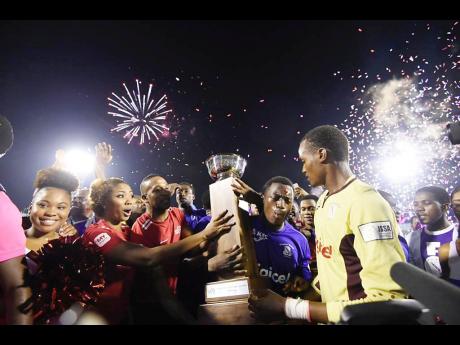 Kingston College's (KC) 32 years wait for the prestigious ISSA/Digicel Manning Cup title came to an end at the National Stadium last night after coming from behind to beat arch rival, St George's ironically by a 3-2 scoreline in a dramatic final. The first half took saw a game played at times at a pedestrian pace, and quite rightly, Damani Harris was left unmarked in the area to walk the ball into the back of the net, to put St George's College ahead after 34 minutes. Second half substitute, Treyvon Reid equalised six minutes after the break. Chantomoi Taylor then restored St George's lead in the 72nd minute. But Michael Allen restored parity two minutes from full time before Nathan Thomas fired home a dramatic clincher which deflected in from 35 yards, in added time.

"This kind of feeling is inexplicable," said an emotional Ludlow Bernard, who came under immense pressure from the KC die hard during his three year reign. "I am not normally an emotional person, so when you see me jumping, you must know what it means," he said.

"I have a bunch of boys that really believe and they played for the coaching staff, and they play for the school. When we were down, and with the minutes ticking away, I looked at my clock and said six minutes, (captain) Casseam (Priestly), six minutes, and they said coach we are not going to let this one go and they dug deep.

"When we got the tying goal, probably they should have been a bit more comfortable and go to penalties. But they said coach we want to finish this now. They said no penalties and I got the (winning) goal from an unexpected source, who has never scored a goal. So I have to lift my hat to them," he commented.

Both teams started well and created good chances, but as the game grew, Kingston College became more dominant and wasted good chances through Thomas, Shaquille Smith and especially Ari Rogers, who has having a seriously off night.

St George's also had a big penalty shout for turned down after Harris brought down after 25 minutes. Rogers then squandered the best chance of the half when he fired wide of an empty net after beating goalkeeper Orville Smikle. St George's then made them pay when Harris latched on to a through pass and calmly slotted home.

But the lead did not last long after the break, as a minute into the second half, Reid capitalised on a shot spilled by Smikle and fired home the rebound from three yards. But St George's were back in front on 72 minutes when super sub Taylor scored with a well taken header from a corner.

Harris should have put the game to bed for St George's three minutes from the end, but he skied his effort over an empty goal from three yards. Kingston College then broke down field and Allen converted a rebound from Reid's shot to tie the score. But with the game seemingly heading to penalties, Thomas, an unusual goal scorer, surprised the entire stadium with a speculative effort from 35 yards that took a deflection on its way past Smikle.

St George's College coach Neville 'Bertis' Bell said both teams played hard and gave his opponents praise for coming out on top after a thrilling and intense battle. However, he thought Harris' miss was decisive."Congrats to Kingston College, they never gave up. But this is football, we went ahead twice, and they came back and won the game, so give them a lot of credit," he said.

"With about 10 minutes to go, it would have been 3-1, and I thought had we scored, we would have won the game. But he's a young player and I'm not going to kill him. He scored the first one and got us into the Manning Cup final. His miss was a bit unfortunate, but I love him just the same," he said.