Tony Becca | Women's cricket is on the move 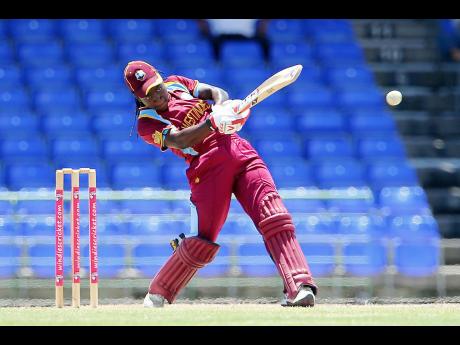 The ICC Women's World T20, which ended in Australia's favour in Antigua recently, was a testimony to the growth of women's cricket, and a timely reminder of cricket the West Indies way.

Looking at the results, the action was far from riveting. Based on the crowds and the atmosphere, however, it was an occasion to remember.

In winning their fourth title in five years, Australia lost one unimportant match while going through the tournament like a conquering army, beating defending champions, the Windies, in the semi-finals by 71 runs, with 15 deliveries to spare, during which eight wickets tumbled for 46 runs, and England in the final by eight wickets, with 29 deliveries still to be bowled.

Boasting the world's top practitioners, the championship produced some dazzling but short innings, many impressive bowling performances, and some brilliant and unforgettable fielding.

Alyssa Healy of Australia and Smriti Mandhana of India drove the ball well and batted confidently and wonderfully, Tammy Beaumont and Heather Knight of England, Meg Lamming of Australia stroked the ball fluently, and so did quite a few others, including Mithali Raj of India, Janeira Khan of Pakistan, and Chamari Atapattu of Sri Lanka, along with young Hayley Matthews, Deandra Dottin, and Stafanie Taylor of the Windies.

The innings of the championship, however, came from Harmanpreet Kaur of India.

In the opening match versus New Zealand, Kauf rolled out a blistering innings of 103 runs off 51 deliveries, with seven fours and eight sixes in a grand and dominant performance.

The boundaries were short, and even though the batting lacked the power of the men's game, it was really good to see the women dancing down the pitch and driving, going back and driving, leaning back and cutting, whipping the ball off their legs, and going down on one knee and sweeping in the vicinity of square-leg.

And although the bowling also lacked the aggression of, say the whistling and deadly bouncer of the men's game, it was also good, particularly the medium-paced bowling, and especially that of Shabnim Ismail of South Africa, Amy Shrubsole of England, Megan Schutt and Ellyse Perry of Australia, Jahanara Alam of Bangladesh, and the left-handed Moseline Daniels of South Africa.

As was expected, however, the spinners were the talk of the tournament, with pride of place going to the left-arm slow bowlers and the right-arm leg-spinners, and their teasing flight, in particular, the 20-year-old left-hander, Kirstie Gordon of England; the 17-year-old right-hander, Amelia Kerr of New Zealand; and to the pick of them all, the diminutive googly bowler, Poonam Yadav of India.

As well as Kauf and Healy batted, as brilliant as Shrubsole bowled in pocketing a hat-trick, and as well as Dottin bowled in dismissing Bangladesh for 46 runs, by taking five wickets for five runs, the selling point for the Women's World T20, and indeed for women's cricket, was the performance in the field.

Looking strong and athletic, the girls were brilliant while running around in the field and stopping some hard drives, making quick and accurate returns to the wicketkeeper, hitting the wicket directly, taking acrobatic catches, and particularly near to the boundary.

The fans will long remember, especially, the one-handed, left-handed return catch by the right-handed Jahanara, the running catch by Suzie Bates running around the boundary in the long-off region, the diving catch at short cover by Eshani Lokusuriyage, the flying catch by Britney Cooper on the cover boundary, the direct hit running in from cover by Dottin, and the sight of Dotting diving to her right at cover to take an amazing catch.

While all the teams were wonderful when bowling, they were brilliant, most of them, in the field, and especially the Windies.

And while Australia wavered a bit in the final, the Windies turned up with a really sparkling performance against South Africa while fielding brilliantly and picking up the last eight wickets for 21 runs on the way to dismissing South Africa for 71 runs.

With Australia and the Windies ending up in one semi-final, and with Australia winning, it was not business as usual after the result of the last Women's World T20 tournament.

With England and India meeting in the other semi-final, and with England winning, it was, however, business as usual after the World Cup final last year.

And with Australia winning the tournament, and with England finishing second, the Windies and India next, followed by South Africa and Pakistan, then by New Zealand and Sri Lanka, and finally followed by Bangladesh and Ireland, despite the uncertainty of the game, especially in the T20 version, there were no surprise results.

Apart from the two unimportant games in the final group matches, all the matches ended with the higher ranking team winning, and thus all the teams finished the group stages, and the tournament, in the order of their ranking.

Women's cricket, as was the case in the World Cup last year, has, however, captured the imagination of the fans, particularly in its athleticism, technique, and basic skills, and its number of young, exciting players.

The talk of this edition, however, was what tempted the Windies to bowl first and, more important, to bat last in the semi-final encounter with Australia, and what prompted India to omit Raj from their semi-final match against England.

After ignoring all the 'Monday morning quarterbacks', Taylor must now be, however, remembering the age old saying: 'Whenever you win the toss, think once, think twice, and then decide to bat.'

Also, Taylor must be remembering the other age-old advice in a one-innings game: 'Finish with your best weapon'.

Based on recent performances, the combination of bowling and fielding was the Windies' best weapon.

Probably the biggest blunder in the tournament, however, was India's decision to omit Raj from the semi-final match.

There has been a stream of accusations and counter-accusations by all concerned, following the omission of Raj, but nothing anyone says, even the coach and the captain, can erase the fact that Raj was undoubtedly one of the two top batters in the India squad. You cannot erase that she is one of the best batters that India has ever produced, that she scored 51 off 56 deliveries and 56 off 47 deliveries in hitting the top score in her two innings a few days before that semi-final match, and that even though she is not as explosive as Kauf herself is, she may have provided stability, especially in turbulent times.

India collapsed from 89 runs for two wickets to 112 runs by losing eight wickets for 23 runs in 34 deliveries against England in the semi-final.