Burke making the most of his opportunity 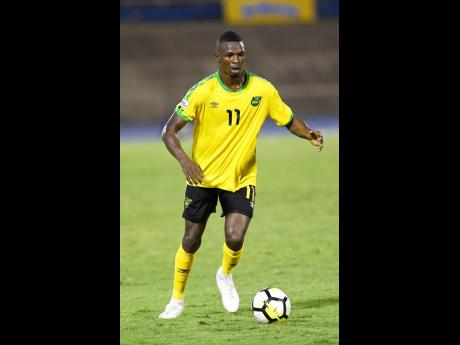 After two seasons with Philadelphia Union's affiliate team, Bethlehem Steel, in the United Soccer League (USL), the United States' second-tier football league, national striker Cory Burke had nothing more on his mind than making it through to the first team.

So when he got the opportunity to train with the Union's main squad in preseason, he ensured he made a strong impression, and that led to his chance to play in the MLS with the Union, and since making his debut, he has not looked back.

Burke assisted a goal on debut and scored in his first start for the club. He then went on to net 14 goals in all competitions and helped them to the US Open Cup final and the MLS play-offs.

"Knowing that I was part of the (Philadelphia Union) organisation playing with Bethlehem, I always had the mindset to play in the first team and I got the opportunity. From preseason I have been showing the coach that once I play, I will score, and they gave me the chance coming off the bench and I assisted a goal and got a guy sent off and I got my starting position from there," he recalled

"I got my first start after about seven, eight games and I scored, but the game didn't end how I wanted it, as I picked up a red card. I missed a game and came back and scored in about six games straight and everyone there is loving it, the fans, coaching staff, even the guys from Bethlehem now look up and they are happy to see me, as I was there with them and now I am doing well in my first season, scoring 14 goals in all competitions, so it has been a good season," he told The Gleaner.

He says playing in the MLS has also improved in all aspects of his game, and he is hoping he can progress to an even higher level of football.

"Playing with and against quality players, the likes of Zlatan (Ibrahimovic) and (Wayne) Rooney, (Luciano) Acosta and (Sebastian) Giovinco, I learn a lot. I learn a lot playing in the MLS and I think I have more to go. I always have plans to improve, and once you to play at the top, you want to go further up in the business and make everyone proud," he continued.