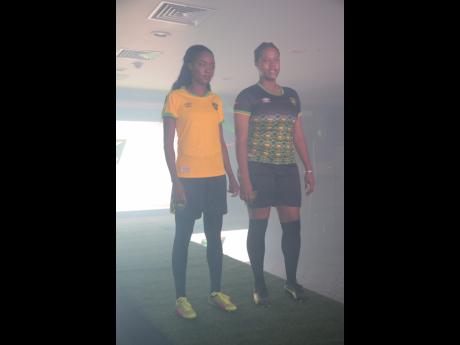 Reggae Girlz Sashana Campbell (left) and Chris-Ann Chambers model the new national home and away kits made by Umbro, during a launch event at The Jamaica Pegasus hotel recently.

Two national senior female footballers have said that they would like to see more focus being placed on women's gear by the sport's equipment brands.

With the growth of the women's game internationally, there have been many advancements to attempt to bring parity with the men's version. One such was the first ever Women's Ballon d'Or trophy, which was awarded to Norwegian player Ada Hegerberg earlier this week. However, some female players want to see more done in the sport, especially with regard to equipment.

England footballer Claire Rafferty has battled acute cruciate ligament injuries throughout her career, and research done on the player has suggested that her footwear not contouring to her feet have contributed to her ailments.

Defender Allyson Swaby says that while she does not have many issues with footwear, men's gear can at times be uncomfortable.

Her teammate Chris-Ann Chambers, a goalkeeper, agrees. However, she says that over time, she has become accustomed to wearing ill-fitting gear.

"Most of the gear that we get are from the men's line. There's none specifically made for females, that I know of, anyway. They may just change the name on it to say Reggae Girlz, but the ones I know are made for men. For instance, a lot of men's calves are bigger, so for us, we have to be finding ways and means to keep our shin guards in place. They are sometimes a lot bigger, so if you want shin guards for us, you'd probably have to go down to children's sizes. My gloves don't always fit perfectly because they're men sizes. A lot of times we can't find half sizes, especially in Jamaica."

But Matthew Christie, chief executive officer of Soccer Xpress, a local jersey brand and equipment distributor, says that there is equipment made specifically for female players, although uncommon.

He hopes that with the growth of the women's game in Jamaica, especially with the relaunch of the JFF Women's League, the demand for female specific gear grows.

"I saw the Waterhouse game (JFF Women's League final between Waterhouse Women and Arnett Gardens Women) and the crowd was really wild," he said. "It will, hopefully, spark the other suppliers to start catering for the women."