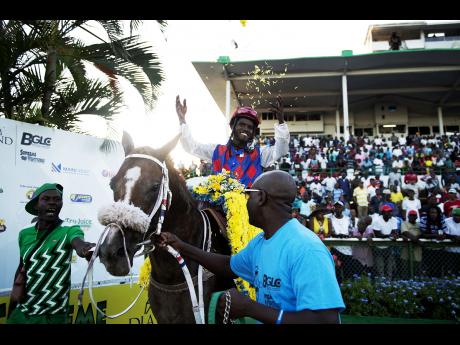 Gladstone Taylor
Winning jockey Robert Halledeen celebrates aboard WILL IN CHARGE after the pair won the cash-rich Diamond Mile race at Caymanas Park on December 1. 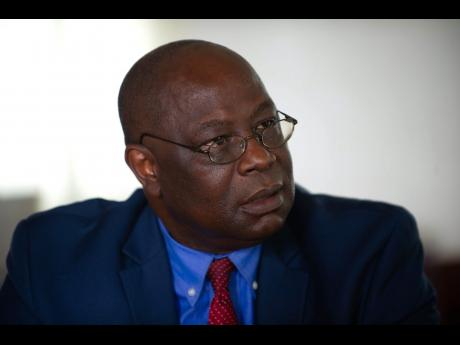 Ricardo Makyn
Vitus Evans, Executive Director at the Betting,Gaming and Lotteries Commission makes a point during a Gleaner Editors' Forum on Thursday at The Gleaner's North Street offices.
1
2

Executive director of the Betting, Gaming and Lotteries Commission (BGLC) Vitus Evans says that the organisation is actively looking for a sponsor to take over the high-profile Diamond Mile race day product.

The event, which was created five years ago by the BGLC, is one of the most popular events on the racing calendar at Caymanas Park and, as always, attracted a lot of spectators from various areas of the society during its most recent staging on December 1.

However, Evans, who was speaking at a Gleaner Editors' Forum at the company's offices in downtown Kingston on Thursday, said that the event has reached a stage where the commission needs to get it off its hands.

"We believe the way it is going now, there may be the possibility of looking for someone (sponsors) to take it over and run with it and take it off our hands because it is not something that we want to continue forever," Evans said.

He said that the BGLC started the Diamond Mile to lift the profile of horse racing in Jamaica and he believes the objective has been achieved.

"It was an idea that came to life four years ago when we at the BGLC felt that there was a need to look at possible initiatives to support the local horse racing industry, in terms of bringing more people to the stands," he said. "Based on the success, it has become a branded product, and I think it is time for us to get it off our hands."

Jeanette Lewis, manager of corporate affairs and communications, says that the interest in the event has grown each year, and this year's staging suggests that their objective of bringing more people to Caymanas Park has been met.

"One of the things that we have seen in the years is the interest and the demand to attend the Diamond Mile, especially the in-field experience that we have," Lewis explained.

"This year, we were particularly fascinated by the buzz on social media. One of the objectives of the Diamond Mile is to introduce new fans to the sport of horse racing; to bring people who haven't been to Caymanas Park there, to introduce them to the buzz and excitement, and we have done that."