Hope's unbeaten 108 not enough for Windies 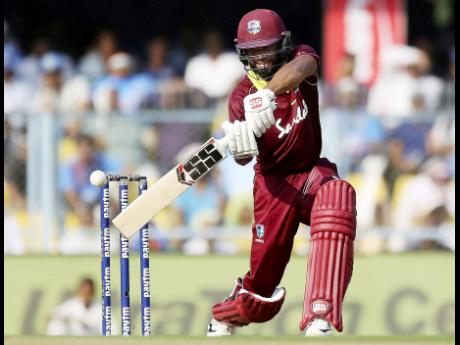 Shai Hope struck his second successive hundred and the fourth of his career but West Indies' four-year wait for a One-Day series win continued here Friday when they went down by eight wickets to Bangladesh in the decisive third One-Day International. Entering the contest at the Sylhet International Cricket Stadium with high hopes after impressively levelling the series in Dhaka on Tuesday, West Indies were brought back down to earth when their batsmen once against disappointed, managing an inadequate 198 for nine off their 50 overs.

The right-handed Hope, whose career-best unbeaten 147 was instrumental in Tuesday's win, was once again the only beacon for the Caribbean side, stroking a high -class 108 not out.

He batted through the innings, facing 131 balls and striking nine fours and a six, but had no support whatsoever as only two other top order batsmen - Marlon Samuels (19) and Darren Bravo (10) - reached double figures.

Hope, deservedly voted Man-of-the-Series, did not take the field when Bangladesh batted, however, after taking a blow to the helmet at the start of the 50th over and being put under observation.

Not for the first time, the Windies had little answer to off-spinner Mehidy Hasan, whose four for 29 from his 10 overs left him with the Man-of-the-Match honour.

Bangladesh coasted in reply, with Tamim Iqbal top-scoring with an unbeaten 81 and Soumya Sarkar carving out a near run-a-ball 80, comfortably reaching their target in the 39th over under no pressure.

The series defeat was the Windies' second of the year to Bangladesh following a similar 2-1 loss in the Caribbean earlier this year, and they are now without a series success since they got the better of the Tigers in the Caribbean back in 2014.

Sent in, West Indies lost left-hander Chanderpaul Hemraj cheaply for nine when he whacked Mehidy Hasan to point in the fourth over, but Hope steadied the innings, first in a 42-run second-wicket stand with Bravo and then in a 39-run, third-wicket partnership with Samuels.

The left-handed Bravo struggled for 26 balls before missing a frustrated heave at Mehidy in the 14th over and having his leg stump disturbed. Samuels, meanwhile, faced 32 balls and struck two fours and was beginning to find his stride when he played on to 22-year-old speedster Mohammad Saifuddin in the 23rd over.

Hope was then left to single-handedly shepherd the innings as wickets fell steadily around.

He raised his half-century off 55 balls in the 20th over and was on 53 when Samuels fell with the score on 96.

Shimron Hetmyer (0) and captain Rovman Powell (1) perished in quick succession, leaving the Windies deeper in the mire at 99 for five in the 26th over.