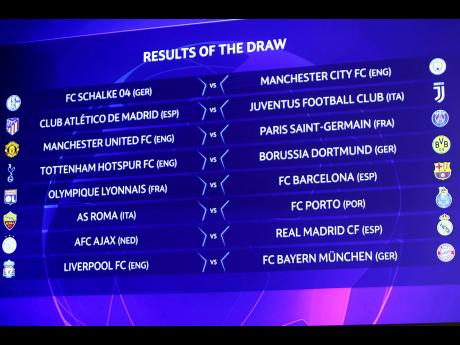 AP
Results of the UEFA Champions League round of 16 draw which took place in Nyon, Switzerland yesterday.

One of the fiercest international rivalries in football will play out three times in the last 16 of the UEFA Champions League when a trio of English teams take on German opposition.

Five-time European champions Liverpool and Bayern Munich were drawn yesterday to face each other, Manchester City were paired with Schalke, and Tottenham will play Bundesliga leaders Borussia Dortmund.

"It was clear it would be difficult, they are obviously a top side," said Liverpool manager Jurgen Klopp, who lost the 2013 final to Bayern when coaching Dortmund. "For me it's nice, going to Germany."

While Bayern are third in the Bundesliga, Liverpool lead the English Premier League. Two goals from former Bayern winger Xherdan Shaqiri lifted Liverpool to a 3-1 win Sunday over Manchester United.

"They're the team of the hour. They're the league leaders in England," Bayern sporting director Hasan Salihamidzic said of Liverpool. "They play good football. They're very physical, and they're full of energy." The first leg is at Anfield on February 19 with the return match in Munich on March 13.

The draw included nine former champions, with a combined 40 of the 63 Champions League or European Cup titles since the competition began in 1955.