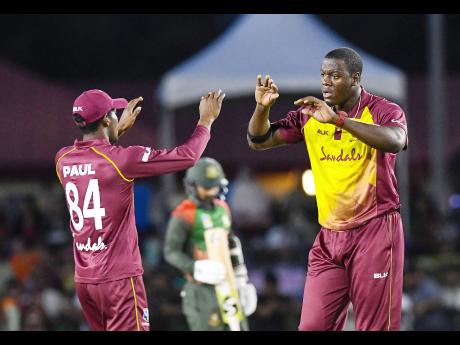 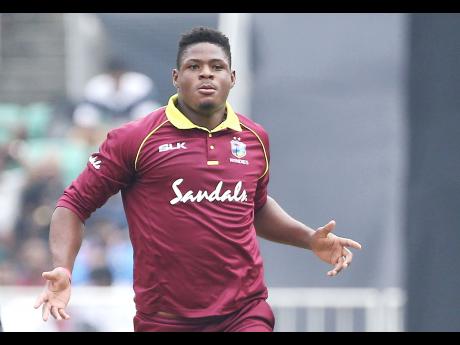 The future of West Indies cricket is foremost in the minds of all the fans of this team that meant so much to this region in the past years of unparalleled dominance. As the team selected stumbles from series defeat to series defeat, journalists, politicians and past players have all put forward theories for the litany of defeat after defeat, some of which were truly embarrassing.
The doyen of cricket writers, Tony Becca, recently posited that the real reason for the poor showing is a “lack of skill and technical efficiency”. True! But what does that truism mean for the future? Should we abandon the present “stars” and concentrate on the youth, the Under 19s, and those who have not yet “learnt” the bad habits that have come back to haunt our present “warriors”? I think that the victory in the final Twenty20 match against Bangladesh that gave us a 2-1 series win manifests exactly what is the main problem with our “talented” cricketers.

Chasing 190 for victory Bangladesh started positively. In the fourth over opener Liton Das was facing our own Oshane Thomas. The fifth ball of the over was called as a no-ball by standing umpire, Bangladesh native Tanvir Ahmed. In real time, it did not appear to be a no-ball, but the decision stood. After the free hit, Mr Das carted the ball for six.
The sixth ball of the over, resulted in Mr Das spooning a catch to the fielder Shimron Hetmyer. Joy was soon turned to consternation as, again a no-ball was called. This time, the West Indies skipper Carlos Braithwaite, protested, first to the on-field umpires, as the skipper (and everyone else) was convinced that an error was made, that  Thomas had delivered a legitimate delivery. In fact television replays CONFIRMED that the delivery was in fact legitimate!
Our skipper then took his protest to the fourth umpire and having failed that, went on to take his protest to the International Cricket Council  representative: Jeff Crowe. The rules were explained to our skipper, that if a no-ball is not called and replays show that it was a no-ball, then a correction is made. However if a no-ball is called and replays show that it was NOT a no-ball then the original decision stands!
As I understand it, the prevailing thoughts of the team were to walk off in protest and forfeit the game. Our skipper requested, and got a further five minutes to consult with his charges. Eventually, skipper Braithwaite convinced the group to continue playing, and to use this obvious wrong to energise and stimulate them. The key word from the skipper was to CONCENTRATE! The result a resounding win by 50 runs!
So there it was, in plain sight. The victory was generated by a motivational talk, as a result of an obvious wrong! A motivational talk. Where have I heard that before?
Every Sports Medicine manual stresses the need for a Sports Psychologist, an expert that is utilised by EVERY successful team, sportsman and sportswoman, except the consistently under performing and disappointing West Indies cricket team. The lack of success of our cricketers lies not in the stars, but in the proven incompetence of those who manage our sportsmen and sportswomen. There are none so blind as those who refuse to see!
Jamaica and indeed the Caribbean, consist of an amalgamation of individuals with a genetic make-up that reflects our African origin. We can and have ruled the world in ANY sporting endeavour that we get an opportunity to practice and play! What we need, what we have to demand, is the requisite skill of those who administer our sport stars. Just give our men and women of the Caribbean a chance. Forget ego, per diem and free trips. Just tell the truth, forget bias and let the best athletes play, and represent us.

I wish for all sports fans, a season of good clean sports where the victor was the best on the day, and that 2019, will find us, the Jamaican sport fan, prosperous and content.