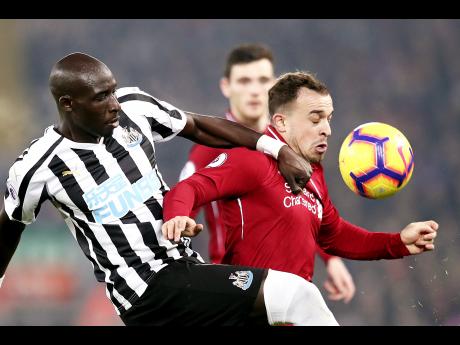 Rafael Benitez has little doubt Liverpool are ready to end a 28-year wait to win the English title. While Liverpool coach Juergen Klopp refused to get carried away after his team surged six points clear at the top of the Premier League with a 4-0 win over Newcastle yesterday, Benitez was certain his former club had the quality to stay in first place for the rest of the season.

"They showed they are good enough to win the title," Benitez said after watching his Newcastle side being dismantled at Anfield. "They have a very good team and a very good squad. When you want to win a league title you need to be consistent and they can do it."

Defending champions Manchester City, who started the day in second position, suffered a second surprise loss in four days when they were beaten at Leicester 2-1.

Tottenham followed up a 6-2 romp at Everton on Sunday with another big win as a 5-0 thrashing of Bournemouth took the London club one point ahead of Manchester City in the standings after 19 rounds, the midway point of the season.

Eden Hazard scored his 100th and 101st goals for the club as Chelsea won at Watford 2-1, while Pierre-Emerick Aubameyang netted his 13th league goal in Arsenal's 1-1 draw at Brighton.

Fulham climbed off the foot of the standings by drawing with Wolverhampton 1-1. A double from Lucas Digne led Everton to win 5-1 at Burnley and Crystal Palace, who beat Manchester City on Saturday, drew with Cardiff 0-0.

Klopp played down the significance of Liverpool's six-point lead.

"That means nothing," he said. "I had no idea how any other teams were playing. Afterwards I got the results and I can say it didn't do a lot for me. It is just information. It's good we have six more points, but that is pretty much all."