TT coach directed by the divine 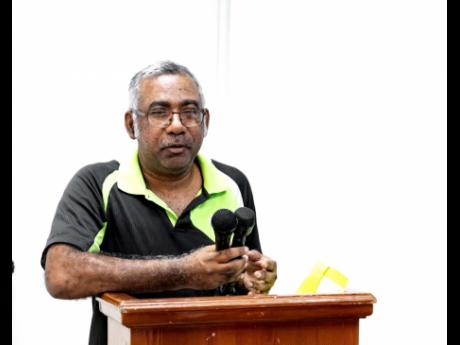 Peter Kavanaugh may be the forerunner in a new wave of Jamaican table tennis coaches teaching the game in the region, but he's no newcomer. Inspired by a Caribbean hero, Kavanaugh has been playing and coaching the game for decades. Having just returned from conducting a training course for coaches in Grenada, he sees his work as a way to help youngsters.

Kavanaugh's time in the Spice Isle was the first opportunity for him to teach the game overseas, but it comes almost 40 years after legendary teacher Godfrey Dennis introduced him and a gaggle of Mandeville youngsters to table tennis. Kavanaugh has loved the game ever since.

With his brother Everett also a steady player, he played high-school and parish table tennis and at The University of the West Indies (UWI), where he helped to elevate the game as president of that institution's table tennis club.

While he was at The UWI, he came under the influence of Fuarnado Roberts, the first Caribbean men's singles champion, and learnt much.

"Everybody knew Robbie had a love for the Caribbean," he reminisced of the man who ended his career with three regional crowns. "He worked all over the place; he was a regionalist in his approach."

He's been coaching since those days and has tutored several of Manchester's brightest talents, including national players Nina Burton and Chantelle McLennon. The coaching bug bit deeper in 2002.

He listed interaction with former national coach Winston Cowans, the 1975 Caribbean doubles champion, as another factor that spurred him on.

He explained the motivation that led him to Grenada.

"I wanted to spread the news of table tennis through the region," he revealed, "so that the kids, the children within the various territories, can actually get an opportunity to learn the thing properly and have an impact in that way."

He believes Grenada was a divine choice.

"They have only six level-one coaches here and one level-two so you look at your life, and you want to make an impact, where can you get the most impact, and if you get a call, and I believe there is a divine direction in this, so I accepted it," he said.

In an observation about the game in the region, he reflected, "The young people might start, but if they get an opportunity to go and live abroad, they're going to take it. We call it the brain drain, but it's an opportunity, so sustainability is always an issue."