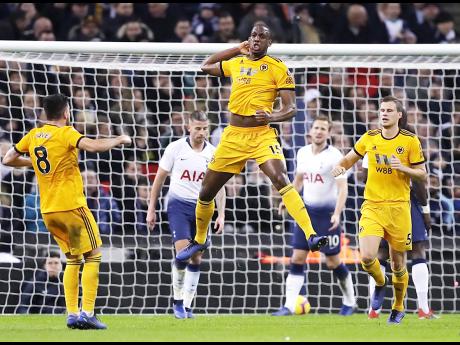 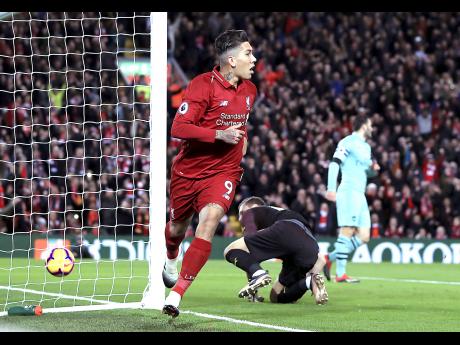 Roberto Firmino scored with an impudent no-look finish. There were jubilant cries of "Ole!" as Liverpool played possession football near the end, and the final whistle was met with a chant of "We shall not be moved" from The Kop.

Juergen Klopp's players look unstoppable as they march towards a first English top-flight title since 1990.

And they are having fun at the same time.

In the latest statement victory in their unbeaten start to the Premier League season, Liverpool overwhelmed Arsenal's meek challenge in a 5-1 win at Anfield yesterday, with Firmino scoring a hat-trick and Mohamed Salah invariably among the goals.

A ninth straight league victory opened a nine-point lead over second-place Tottenham, who unexpectedly lost 3-1 at home to Wolverhampton Wanderers in their first match since seriously entering the title-race conversation.

Manchester City will climb back into second spot, and within seven points of the lead, if they beat Southampton today. But there is already an ominous feel about Liverpool's ruthless performances, and it is now 20 league games undefeated for Klopp's men.

"I'm not the smartest person in the world but I'm really not an idiot," Klopp said. "It's not important how many points you are ahead in December ... if we drop three points, the next headline is, 'Are they nervous now?'."

Tottenham started it by appearing to run out of energy in the loss to Wolves at Wembley Stadium, with all of the visitors' goals coming in the final 18 minutes.

Then Arsenal, arriving as England's fifth-best team, produced a shambolic defensive display that Liverpool's devastating front three happily capitalised on. Sadio Mane was the other scorer.

Arsenal mistakes preceded at least four of Liverpool's goals, two of them being penalties after clumsy challenges by Sokratis and Sead Kolasinac. Salah converted the first to make it 4-1 in first-half injury time and gave up spot-kick duties to allow Firmino to complete his hat-trick in the 65th.

Having the Premier League's most punishing schedule over the Christmas period caught up with Tottenham against Wolves.

It was the team's third game in six days - there is another one coming up on Tuesday, too - and it showed at Wembley as Wolves dominated the second half and scored through Willy Boly, Raul Jimenez and Helder Costa.

Harry Kane, with a long-range effort off his left foot, netted for the third straight game to put Tottenham ahead in the 22nd minute.

"We were wrong in the way we tried to play, too many long balls and our energy dropped in the second half," Tottenham manager Mauricio Pochettino said.

Claudio Ranieri had tough words for Aboubakar Kamara after the Fulham striker's stubbornness almost cost his side three precious points in their battle against relegation.

After Fulham were awarded a spot kick in the 81st minute against Huddersfield, Kamara argued with Aleksandar Mitrovic - the team's designated penalty taker - before eventually taking it himself. He failed, with his shot lacking any conviction and being easily saved by Jonas Lossl.

"I said to Kamara to leave the ball to Mitrovic, he is the man who shoots the penalties," Ranieri said. "It is unbelievable. He did not respect me, the club, the team and crowd. I spoke with him, it is not right. I wanted to kill him."

Cardiff also scored in stoppage time to beat Leicester 1-0, with Victor Camarasa netting to earn the Welsh team its first away league win since getting promoted. Leicester were coming off impressive back-to-back wins over Chelsea and Manchester City.

Brighton beat Everton 1-0, and Watford drew 1-1 at home to Newcastle.