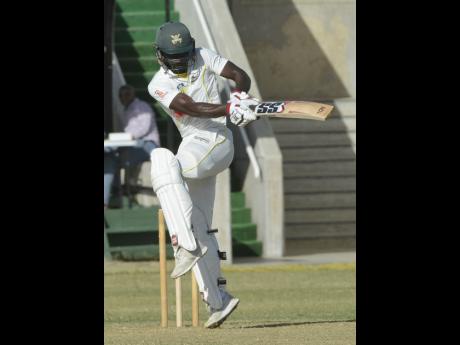 The Jamaica Scorpions won the toss and have reached 96 for three at lunch on the opening day of the day/night Regional Four-day Championship cricket match against the Windward Islands Volcanoes at Sabina Park.


John Campbell was the first batsman to go. He was caught behind off a short rising delivery from pacer Josh Thomas. He made a brisk 21 from 16 balls. Jamaica were then 30 for one. The very next delivery Jermaine Blackwood went leg before wicket, playing around a straight ball.


Opener Chadwick Walton and Assad Fudadin then carried the score to 96 before Walton fell to the left arm spin of Larry Edwards. He went bowled for 52 from 87 balls with eight fours and a six. Fudadin was 18 not out at the break.


Pacer Josh Thomas has so far taken two for 42 from eight overs. Left arm spinner Larry Edwards has one for 13 from seven overs.