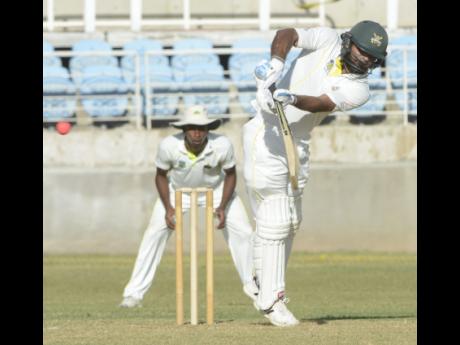 
Jamaica Scorpions are struggling on 202 for nine on Friday's opening day of the day/night Regional Four-day Championship cricket match against the Windward Islands Volcanoes at Sabina Park.


Assad Fudadin is not out on 75 while Reynard Leveridge is unbeaten on two.


Fudadin has so far faced 209 balls and has hit  four fours and three sixes. There was a steady flow of Jamaica Scorpion wickets between lunch and tea. The Scorpions were 96 for 3 at lunch with Fudadin not out on 18. Captain Paul Palmer Jr went to the break before facing a ball. Chadwick Walton 52, John Campbell 22 and Jermaine Blackwood zero were the batsmen out before lunch.


After lunch Palmer was out leg before wicket for  five sweeping at Alick Athanaze. Rovman Powell looked busy in scoring 22 from 36 balls but was out trying to be overly aggressive. He had just hit Larry Edwards for six over long on but, in trying to repeat the shot next ball, he went caught at long off. Aldane Thomas (seven) and Fabian Allen (seven) went in similar fashion. Both were caught on the crease to quick full straight deliveries from Karem Hodge and were trapped leg before wicket.


Nikita Miller was caught behind for zero also off the bowling of Hodge while Oshane Thomas was bowled first ball by the same bowler.


Hodge has so far grabbed four for 38 from 17 overs while the other left arm spinner, Larry Edwards, has two for 64.