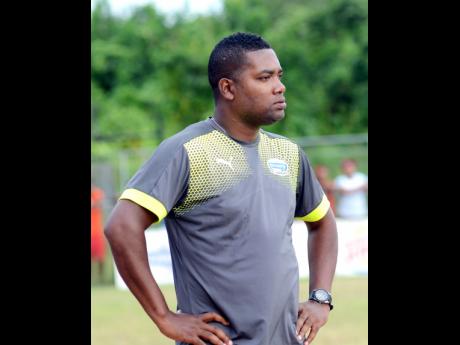 After making the bottom of the Red Stripe Premier League (RSPL) their own for most of the season, Dunbeholden FC are getting a taste of life off it, and they are loving it.

So good is the feeling above the league basement that the St Catherine-based team is looking to go higher. The club, nestled in the Royal Lakes community of St Catherine, owe their new position to a handsome 3-0 midweek win over Reno FC. This result, according to club president Donovan Witter, has given them the boost they need ahead of today's tough home game against former champions Tivoli Gardens.

"It is a good feeling to be not at the extreme bottom, and it gives us some hope to passing the next team that is above us," the optimistic Witter told The Sunday Gleaner yesterday.

"Based on the whole momentum from Wednesday's game and the injection of some players, two of whom played on Wednesday, we are expected to add another three points and move further up the table. That is our objective, and I think the players are realising how serious we are about this," Witter added.

Among the players brought in by Dunbeholden FC are Nico Williams and Mario Phillips, who spent some time in Canada. They are also hoping that Newton Sterling will soon be on board to join forces with Dean-Andre Thomas and Nickoy Christian.

Today's game against sixth-placed Tivoli Gardens will not be an easy one as the West Kingston-based club is keen on remaining in the top six in order to be among the teams with a chance of challenging for the title. Among their key players are the veteran Jermaine 'Teddy' Johnson, Howard Morris, leading scorer Colorado Murray, and the exciting youngster Junior McGregor.

At Harbour View, the former champions, who are now in ninth place, will be aiming to continue their resurgence with a win over Reno. The early season strugglers are enjoying a four-game unbeaten run.

Cavalier FC have the best record in their last five games, with Portmore United and Waterhouse being among their conquests. Having played well away from home, they should be fancied to get the better of eighth-placed Humble Lion, who themselves harbour hopes of getting into the top six. Like other title aspirants, they have been active in this the January transfer window and are hopeful of making two key acquisitions from Arnett Gardens later this week.

Defending champions Portmore United regained their position at the top of the table and will be aiming to cement that with a win over the inconsistent UWI FC, while Montego Bay United host Mount Pleasant.