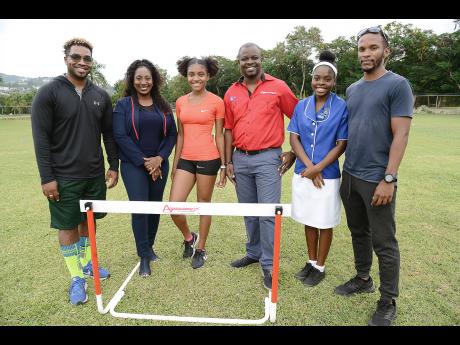 Immaculate Conception High School (ICHS) track and field coach Floyd Quarrie says they are embarking on what he sees as a long-term plan to improve its programme, with a larger number of young athletes taking up the sport this season.

Immaculate, who finished 12th at the ISSA/GraceKennedy Boys and Girls' Athletics Championships (Champs) last year, achieved that feat with 29 athletes. This season, that number has almost doubled as there are 57 girls training for competition in sprinting, hurdles, throws, and jumps.

"We have a number in mind, in terms of the points we want to score (at Champs)," Quarrie told The Sunday Gleaner. "Definitely, everyone is geared towards that. Last year, we fell short of the top 10 because of injuries and mishaps at Champs. This time, we're looking to make a strong presence in the top 10 bracket.

"We pride ourselves on trying to improve every year. We're known for having a lot of hurdlers, so we actually appreciate this because it helps us to build on the technical aspect in the events. In the past, we've had to use makeshift hurdles made of pipes to accommodate us. Actually having a full flight of hurdles to complement the programme gives us a boost."

Head coach Franz Forde says the success of shot putter Danielle Sloley, over a number of years, has aided in the team recruitment.

"It did amazing things, not just for the throws programme, but the track and field programme as a whole," he said. "We have more than 57 girls right now in the programme. A lot of them started joining because they were aware of Danielle Sloley. We're really grateful for that. It brought it junior throwers this year, girls who thought that they never had the potential to run. Danielle made them aware that there's something outside of running and they can come and throw."

While Calabar High, Kingston College, and Jamaica College, all contenders for the Boys' title, have created synthetic tracks for their development programmes, ICHS has sought infrastructural development, too, with the help of sponsors Accupower Jamaica and the New York chapter of its Alumnae Association.

Accupower has given the school new training equipment consisting of hurdles, blocks, shots for throwers, and sand for jumpers. Accupower commercial director Chris-Talbert Golding said it was a fulfilling feeling seeing how the athletes responded to receiving them.

"We realised that the sport itself was a very expensive endeavour," he said. "They would've highlighted that there were some particular needs, to us, including hurdles, and a number of other things, including blocks, that they needed, to really get their programme going to ensure that they have the practice with the right equipment so that they can execute come game day. We thought it was prudent to support them in this endeavour."

Team captain Shantelle Riley is eager to see the benefits of the new equipment.

"We feel very good because this shows that the girls are stepping up," she said. "People are seeing what we're capable of and that we can do well in the sport. We're trying to excel at all the events, but we're trying to step it up in the hurdles, especially."