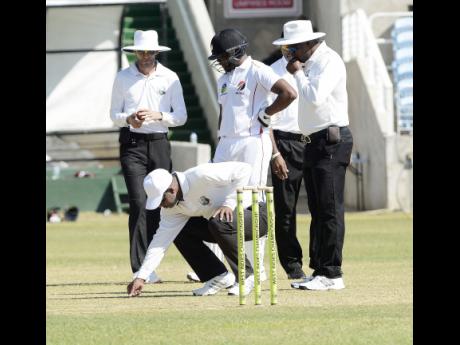 Ian Allen
Umpires examine the wicket at Sabina Park just before calling a halt to play because of a damp and dangerous wicket in the Cricket West Indies Professional Cricket League Regional 4-Day clash between Jamaica Scorpions and the Trinidad and Tobago Red Force last Thursday. File

Cricket is a fascinating and complex game. It is the only game that can last five days and at the end, no winner is declared.

The selection of the team, in those early days, was relatively simple. Of those who played the game, the best players virtually selected themselves. In time, more people began playing the game and different forms of the game developed.

Different types of games required different approaches, and with more and more countries playing, external factors began to have a larger impact on the outcomes.

Thus, administrators, selectors, groundsmen and the physical and mental condition of the players increased their significance on the outcomes of matches.

As the game progressed and new formats evolved, the economics of playing and winning changed dramatically. While most of the players still played for fun, The money now up for grabs now meant winning and playing well brought players economic independence.

So, jealousy, bad mind and envy now began to show its ugly head. If the players, those reaping the economic and media spotlight, did not show their gratefulness, revenge seemed to be the order of the day.

The message to the players now became, "Without me, you are nothing. Smile and obey! Individuality and a mind of your own will result in your inability to continue playing."

The outcome, poor results as the ones who smile and say "yes boss" are not as good as those whose talent and skill assured success and economic well-being. The fans and supporters of the sport would eventually begin to demand change and, therefore, those in charge had to find ways to keep themselves in power, until players with money and prestige fell in line.

How to do this? More money for the second eleven, those not good enough to compete with those sidelined for attitude, defend to the max, other members of the team selectors, groundsmen, and those in charge of the mental and physical condition of the players whose actions fall short of recognised international norms.

Jamaica's cricket is now mimicking the fortunes of Windies cricket. After years of dominance, Jamaica are now the beating stick of the other teams. Change of personnel and a change of coach have not affected the results.

The fans are regaled time after time of teams going back to the drawing board and leaders promising a winning run in whatever competition they are involved in.

No one in the hierarchy of cricket is interested in looking at themselves and removing themselves for the good of the team.

In football, Ricardo 'Bibi' Gardner, a successful Reggae Boy, motivator and coach of the Harbour View football team resigned and removed himself from the day-to-day management of the players, much to the dismay of the fans, managers and team. Now, Harbour View are getting better results! Sacrifice for the good of the team!

The recent debacle at the home of cricket in Jamaica, Sabina Park, wherein umpires and groundsmen deemed a pitch "fit for play" only to call off the match after a few overs, and restarting the game when external conditions changed is an embarrassment of monumental proportions. Up to now, no sanctions for those involved. "Oops" seems to be an acceptable excuse. The president of the Jamaica Cricket Association (JCA) says "it wasn't me" and the administrators favourite quote: "an enquiry will be held".

In Windies cricket, no change is expected in the administration of the sport. The mini-revolt of one member of the Board will 'pfft' like a damp fire cracker. In Jamaica, noted successful cricketer and administrator Mark Neita has declared himself a candidate for president of the JCA. Dare we hope? Will change come? Will cricket, at last, be given a realistic chance for revival? If what is happening at the Melbourne Cricket Club is used as a guide, hope is tangible.