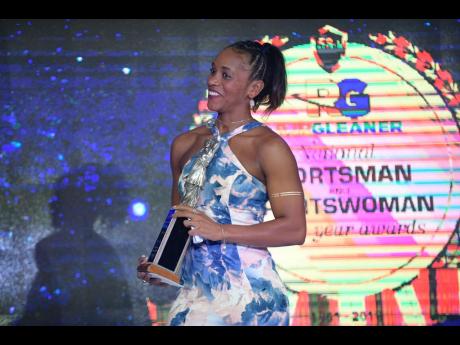 Kenyon Hemans/Gleaner Photographer Alia Atkinson is all smiles after receiving her RJRGLEANER National Sportswoman of the year award at the Jamaica Pegasus on Friday night. 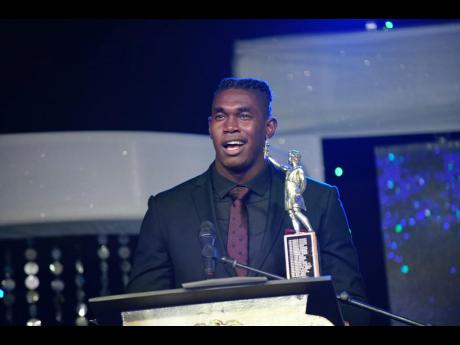 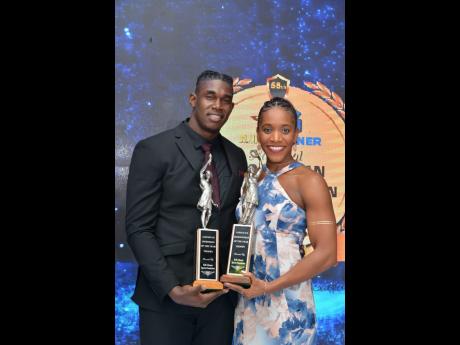 Kenyon Hemans/Gleaner Photographer (from left) Fedrick Dacres and Alia Atkinson pose with their trophies after winning the male and female awards respectively at the RJRGLEANER National Sportsman and Sportswomen Awards at Jamaica Pegasus on Friday.
1
2
3

Alia Atkinson capped off a year of aquatic supremacy, by claiming her second consecutive RJRGLEANER Sports Foundation Sports Woman of the Year award, and her third overall, at Friday night's ceremony at the Jamaica Pegasus, which marked 2018's sporting excellence.

Discus thrower Fedrick Dacres outdistanced his rivals to take his first ever Sportsman of the Year award.

Atkinson broke her own record in the 50m breaststroke, when she set a time of 28.56 seconds at the FINA Swimming World Cup in October. She also claimed three CAC Games and three World Cup gold medals in 2018.

Her sweep of trophies extended to the Gleaner Iconic Award, and the People's Choice "Performance of the Year" Award for her world record swim. Atkinson was all smiles as she took to the stage each time to claim her trophies.

In her acceptance speech, she said she envisions a day when athletes' welfare improves, so more can bring hope and joy to the country.

"I have faith in my vision for Jamaica's sports," Atkinson said. "Having a vision is not for the weak of heart. It takes faith to create goals because we are satisfied with the here and now."

There was a tie for the runner-up spot with triple jumper Kimberly Williams and shot-putter Danniel Thomas-Dodd sharing the honour, after both won gold at the Commonwealth Games and silver at the World Indoor Championships in their respective events.

Dacres becomes only the second ever field event athlete to claim the Sportsman of the Year accolade. Three-time winner James Beckford, a long jumper, is the first.

After breaking his own national record with a throw of 69.67m, Dacres' year went from strength-to-strength, as he took Commonwealth Games gold, before taking the IAAF Diamond League trophy and NACAC gold in Toronto, Canada.

Dacres, known for being a shy character, was very outspoken on the night.

"I've invested a lot last year, being a student at UWI and in other areas," Dacres said. "There would be no Fedrick Dacres with no strong background. I am a product of everyone who's been behind me."

Sprint hurdler Ronald Levy was the runner-up in the male category after his Commonwealth Games gold medal success in the 110m hurdles.

British High Commissioner to Jamaica and The Bahamas, Asif Ahmad, was the guest speaker at the event.