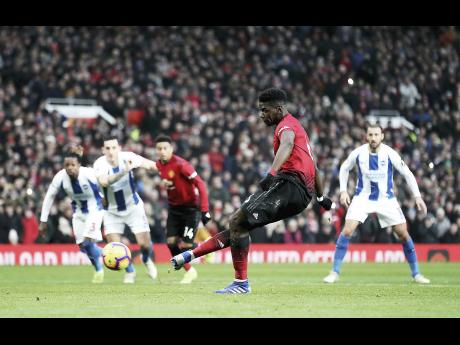 On a day of commemorations for Matt Busby, Ole Gunnar Solskjaer surpassed the start of the late, great Manchester United manager.

With a 2-1 victory over Brighton yesterday, Solskjaer racked up a sixth successive Premier League win since replacing the fired Jose Mourinho. Busby, who died 25 years ago this week, only managed five in a row when he started out at United in 1945.

Although United remains in sixth spot - just like a month ago when Solskjaer was hired - it is now only three points behind fourth-placed Chelsea. Paul Pogba and Marcus Rashford secured the latest victory with first-half goals.

Chelsea's grip on the final Champions League place was loosened by a 2-0 collapse at Arsenal, who are ahead of United on goal difference.

United are still waiting for their first title since Alex Ferguson retired in 2013. Liverpool have been waiting since 1990 but are now well placed to dethrone Manchester City as champions.

A 4-3 victory over Crystal Palace put Liverpool seven points ahead of City, who play today against last-place Huddersfield.

It wasn't the only 4-3 scoreline on Saturday, with Wolverhampton edging a pulsating encounter with Leicester when Diogo Jota completed a hat-trick in the third minute of stoppage time.

Newcastle climbed out of the relegation zone and sent Cardiff into the bottom three, with a 3-0 victory over the Welsh club. Southampton's revival under Ralph Hasenhuettl continued with a 2-1 victory over Everton, taking the south-coast team three points clear of danger. Burnley are between Newcastle and Southampton after drawing 0-0 at Watford.