Gaye has young track career on his side – Wilson 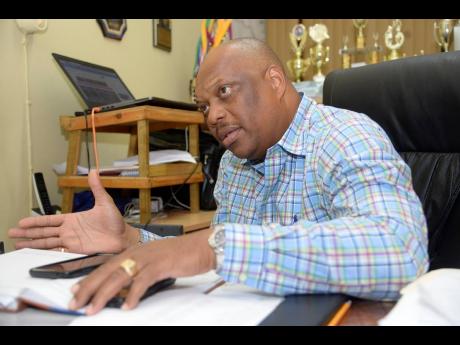 With Akeem Bloomfield and Nathon Allen cutting their ­personal bests in the 400 ­metres to 43.94 and 44.13 seconds, ­respectively, last year, the men’s quarter-mile race is building up to be a cracker at the National Senior Championships later this year.

But Maurice Wilson, the head coach of the GC Foster College based Sprintec Track Club, is not worried about his quarter-miler, Demish Gaye, being left behind as he believes that he has a young track career on his side.

“When I started coaching Demish in 2015, it was a man who never participated at Champs and never competed at any high level in track and field,” he explained. “When you compare him to ­people (Allen and Bloomfield) who ran 45 and 44 seconds in high school, then you would realise what he is going up against in terms of ­experience. And as such, we ­expect him to keep on improving as he gains more experience.”

Gaye burst on to the scene in 2016 with a series of sub 46-seconds runs. He followed up those performances a year later with a lifetime best 44.55 performance at the IAAF World Athletics Championships to qualify for the final of the event, where he placed sixth.

“When he improved to 44.5 seconds, I knew that there had to be an off year (perform below par) for him, and last year, when we thought it would have been an off year, having not trained for majority of the season, he came back and got the NACAC title, and it tells me a lot about his desire for the sports,” Wilson said.

Along with his NACAC title, Gaye also finished in the final of the event at the Commonwealth Games in Gold Coast, Australia, last season.

Wilson also acknowledged that the 400 metres has become increasingly competitive after Wayde Van Neikerk shattered Michael Johnson’s 17-year-old record at the Rio de Janeiro Olympic Games in 2016, running 43.03 seconds. But he believes that Gaye stands a good chance of getting to a podium position if he makes it to the final again.

“There are a lot people who are running 43 seconds, or close to it, but my experience tells me that if an athlete gets to the final and if he is conditioned properly, he stands a chance of getting on that podium,” he said. “Sometimes it is really surprising the times that give you a medal in the 400m.”