Tony Becca | Whenever it rains, it pours 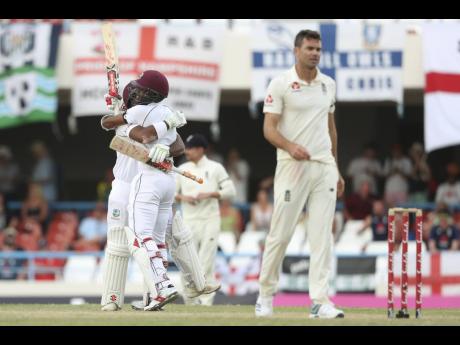 And with the third and final Test now in progress, and the dreaded “blackwash”, for England, now a distinct possibility, the feeling of euphoria could develop into total, unbridled ecstasy should the West Indies emulate the 5-0 margins of victory over England in successive back-to-back tours in 1984 and 1986.

And this recent flexing of the muscles by the West Indies is really surprising, not so much because it happened, but because it has happened only so few and far between, and especially this time against a team of England’s calibre, or reputation, and after so many disappointing losses, most recently against a lowly placed, or ranked, team like Bangladesh.

And regardless of what many may say, the victories were simply brilliant, dominant, and commanding, and no praise is too high for Jason Holder and his team, and in this instance, every single one of them.

In Barbados, most of the praise belonged to Shimron Hetmyer, Kemar Roach, Shane Dowrich, and Holder.

In Antigua, however, the players, all of them played a part, including the impulsive debutant, John Campbell, an outrageous six to win the match, and the fortunate returnee, Darren Bravo, who, in a long, slow but important innings of 50 in a marathon 342 minutes, curbed his natural tendencies in a gallant fight for the team.

It was good to see, in a team in which the players earlier seemed to have lost the will to fight against adversity, a team in which the players, time and time again, walked off the field at the first sign of discomfort and did not face the starter at the first sign of illness or a slight injury, Alzarri Joseph, taking his loss in stride, staying around, and playing his part on the morning after his mother’s passing.

The two victories, against the odds, one by 381 runs and the other by 10 wickets, the first inside four days and second three days, were wonderful and memorable. A third victory, to make it 3-0, would not only be unbelievable, even now, but would also underline the importance, not only of belief, but also of team spirit.

On the eve of the series, and to their everlasting credit, Shai Hope and Roach confidently backed the West Indies to win, and for some time now, Jason Holder, the captain, never missed an opportunity, even in parlous times, to talk about the potential of the “young” team.

This victory, however, was the stuff of which fairy tales are made. It reminded us not only of the days of Garry Sobers, Rohan Kanhai, and Lance Gibbs, Vivian Richards, Gordon Greenidge, and Clive Lloyd, etcetera, but also of Denis Atkinson and Clairmonte Depeiza, Wes Hall and Charlie Griffith, Andy Roberts, Michael Holding, Joel Garner, and Colin Croft.

Yesterday morning when the West Indies began their bid for the “blackwash” of England, they did so without their inspirational and in-form captain.

Holder was suspended for the game after a breach of the ICC’s Code of Conduct, which fined him twice as much as the players and which also also suspended him for one match.

The “crime” was all about the West Indies’ failure to bowl the requisite numbers of overs for a day during the second Test match.

The rule came into effect following a move to speed up the game. It is a rule that has been applied to all who have transgressed, and as such, it was fairly and justly applied.

In other words, no one can seriously accuse Jeff Crowe, the ICC’s man on the scene, of doing anything underhand.

While the rule is aimed at getting rid of unsporting behaviour on the field, however, or of intentional time-wasting, it is, or can be, and has been stated in this column before, tantamount to throwing out the baby in the wash-pan, or as Cricinfo’s Andrew Miller has written recently, “it is the ICC’s killjoys at work”.

Holder’s “crime” in Antigua was that he failed to get his team, a team of four fast bowlers, to bowl the required number of overs, not by bowling five or six overs short, but by bowling two overs short of the number expected.

Remembering, however, that in any jurisdiction, the penalty for any crime should mirror the offence, this penalty, for missing two overs in any situation much less in a winning one, appears totally unjustified.

Apart from that, apart from turning a winning situation into a joke, to fine the captain twice that of the players and also to ban the captain for one and the same offence smells of “double whammy”, and that also seems to be an overkill and unreasonable.

That is comparable to what happens in football when a goalkeeper fouls an opposing player in the box, and the referee shows him the “red card” while awarding a penalty against his team, all from one and the same incident.

And, as Suresh Menon wrote a few days ago on CricInfo: “When a Test match finishes in three days, overrate becomes irrelevant.”

The ICC should also remember that Test cricket is a long and hard game and that the speed of the game is secondary to concentration and technique and all the other things that separate it from one-day cricket and especially T20 cricket.

In Test cricket also, where the best is expected to compete against the best, would it be better, for the sake of two or three overs, to have one like, say, Kraigg Brathwaite, or John Campbell, bowl two or three overs of “lollipops” than to have Roach and company bowl two overs of real, testing pace?

On top of everything, international sport calls for the best against the best, and everything should be done to keep the best players in action throughout a contest in order to maintain the level of competition and to attract spectators to a game.

Ask any spectator what he, or she, would prefer to see. Is it bowlers like Brathwaite and Campbell bowling a few overs, especially when their team is winning, or is it bowlers like Roach, Gabriel, Joseph, and Holder himself steaming in and really letting it go?

The ICC muffed this one. Rules are rules, and the rules must apply to everyone. The rules, however, should not affect the game, and the fans in St Lucia had a right to see the best West Indies team in action in a Test match and also to see their captain, who has had a successful series as captain, bowler, fielder, and batsman in charge.

Time wasting is bad for cricket, but the ICC needs to find a better way to fight it, a way that will not rob the game of a player who is at the top of his game, is a credit to the game, one who the fans want to see, and one who they pay to see play.