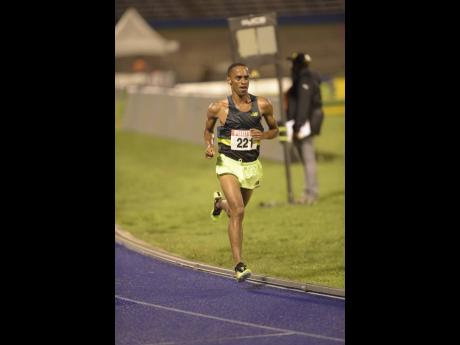 Kemoy Campbell’s agent, Ray Flynn, said his family is very hopeful that the national record holder in the 10,000m (28.06.40) and the 3000m (7.41.87) will ­recover from his collapse at the Millrose Games in New York, which left him hospitalised, on Saturday.

The 28-year-old Campbell, who was on pacing duty in the 3,000 metres event, which took place at The Armory, walked off the track after five laps, or 1000m into the race, and collapsed on the inside of the track.

The incident brought the meet to a temporary halt on the insistence of the crowd, and he had to be revived by defibrillator. He was attended to and revived by ­emergency-service units at the venue, who treated him for almost 30 minutes, before transporting him to the Presbyterian Columbia Medical Centre, where he is ­reportedly now in a medically induced coma.

“They are conducting further tests on him at the hospital, and the family doesn’t want to release any details,” Flynn said. “I know that they are working through different tests to see what the matter is.

“I don’t have anything in detail, but I did ask them [the family] if they wanted to say anything, and they did not, because the family doesn’t want to put anything out there. But I think that they are optimistic and are praying, and they are with him. It’s a great hospital, and they are checking him and keeping him comfortable, and he is going to be okay.”

Flynn told The Gleaner that the doctors have been working assiduously to find the cause of Campbell’s collapse.

Campbell became the first Jamaican male to compete in a World Championships 5000m final when he finished 10th in the event at London 2017.