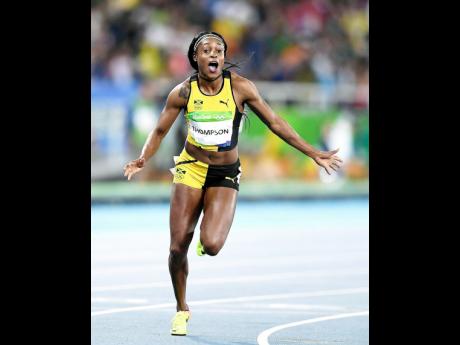 After she opened her 2019 season at the Queens/Grace Jackson track meet last month, Olympic 100 and 200 metres champion, Elaine Thompson,  vowed that she will learn how to compete with an Achilles tendon injury that has become an albatross on her illustrious career.

And on Saturday she took the first step in surmounting the challenge by winning a thrilling women’s 60m final at the Muller Indoor Grand Prix in Birmingham, England.

Thompson stopped the clock at 7.13 seconds, her fastest time over the distance since 2017. In a three-way photo-finish, British sprinter and former World Youth 100m champion, Asha Phillips, was just behind in 7.14 while Marie-Josee Ta Lou of  Cote de'Ivoire took third in 7.15.

Three Jamaicans ran in the final. Ramona Burchell, who made the final  in the event at the World Indoor Championships last year was fifth in 7.21 and Gayon Evans, the Commonwealth Games 100m bronze medallist, was in 7.28.

Stephenie Ann McPherson was also a winner on the day as she captured the women's 400m in 52. 24 seconds. Britain's Eilidh Doyle was second in 52.43 while Lisanne De Witte of the Netherlands rounded out the field with 52.61.

Tajay Gayle picked up where he left off last season as he leaped to a personal best in the men’s long jump with 8.10 metres. His effort was only bettered by Cuban star jumper, Juan Miguel Echevarria, who produced 8.21m on his final attempt to grab the first position.