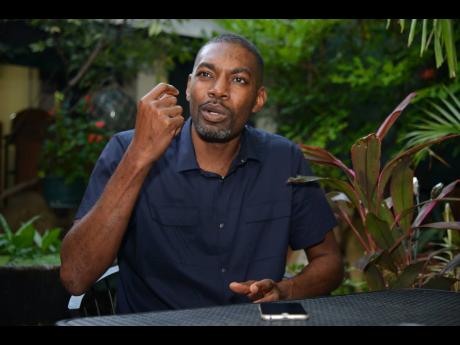 Dr Gregory Haughton, Olympic medal winner and now mental-preparation expert, says a gold medal he won 20 years ago turned his track and field career around. Haughton says victory over a tough field at the 1999 Pan American Games revived his spirits and paved the way to an Olympic bronze medal the following year.

Speaking just after giving the keynote address at the Gibson-McCook Relays Howard Aris Memorial Lecture held at the University of Technology on Wednesday, Haughton went through a lean spell after a third-place finish at the 1995 World Championships. “That meant a lot to me because I was coming off a three-year drought,” he recalled, “and to be able to dominate a field like that, you know, I was happy because that to revive my spirits, to let me know that I wasn’t out of the game.”

When he crossed the line in a near-personal-best time of 44.59 seconds, he was the first Jamaican medal winner since Bert Cameron gained a silver in 1987.

Now 45, the five-time World Championships finalist went on to finish third at the Sydney Olympics the following year, but ranks both accomplishments highly. “Even though the 2000 race means a lot in terms of what it has accomplished for Jamaica on a whole, and the medal,” said Haughton, “I would say the two very important races in different phases of my life, and I can’t really separate the two unless I have to.”

His Olympic 400m bronze medal was the first for Jamaica since 1952.

In a poignant moment at the start of the Olympic final, Haughton thumped his chest while waiting in lane eight. It was an uncharacteristic show of bravado. “It’s the first time I ever did something like that because I’m easy-going,” he said, “but at the time, it was about the heart at the time, and I felt this was an opportunity for me and it was a way to motivate myself, to say, ‘Greg, you’re in lane eight, people may write you off but you can do it’.”

Haughton believes today’s Jamaica 4x400m team can break the 22-year-old national record of two minutes 56.75 seconds set by a team he was a part of, alongside Michael McDonald, Danny McFarlane and Davian Clarke. “As I always say, this team, this crop of guys is the best on paper,” he analysed. “Will they put it together?”, he wondered. Then he identified the ingredient that gave his group medals at six straight World Championships and two Olympic Games. “What Danny, myself, Davian and McDonald had, we had the heart, lion heart, and the way we put the team together, you know, we were prepared to give our all,” he said.

“I don’t know if this young crop has that patriotic mindset like we did, where we’re going to leave everything on the track,” he said.

“So, it is possible,” he concluded. “I hope they can rise to the occasion but it is left to be seen.”