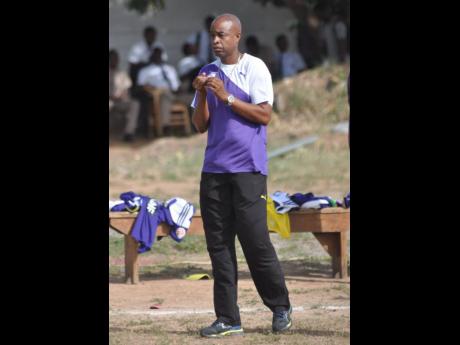 Nearly seven months after his departure as head coach of Kingston College’s track and field team, Neil Harrison, the new man in charge of Jamaica College’s (JC) athletics programme, finally opened up about his departure from the North Street-based institution, insisting that he harbours no hard feelings.

Harrison also noted that the reception he got from Jamaica College made him feel like he had been there for years, pointing out that he is fully settled in at his new home at 189 Old Hope Road.

“I am settled, and words cannot express the reception. The staff is one that accepted me readily, and it doesn’t feel like I’m new. I feel like I have been here for a number of years, and that’s the type of reception I want to thank all the staff and students for. But the JC family’s hospitality has been very warm, and one thing that made it easy is that I was known before I came here,” he said.

Harrison knows that his ultimate job is to deliver the Mortimer Geddes Trophy at the ISSA/GraceKennedy Boys and Girls’ Athletics Championships, however, he believes that some changes are needed to the school’s athletics culture, and he believes that it will take time before he gets the full support for his philosophy.

“So far, it’s a work in progress for me. I am still learning the culture and trying to change the culture at JC. They have their own philosophy, and change is not readily accepted by everyone that easily. But the beauty about it is that the coaching staff has accepted it. They are a very smart group, and we work good together as a group, which is a good sign. But to get the students to grasp it is the challenge. Some of them have been here for five-six years and something new is coming to them, so it will take time for them to adapt, adjust, and make the change, and so time will be of the essence.

“But I am just hoping that come Champs, we will perform as best as we possibly can. We have been training hard, we are committed, we are dedicated, and we are ­hoping that that commitment, wherever it lands us, we will accept it. But so far, so good. The athletes are responding, and we have a cohesive coaching staff, so things are not bad here at Jamaica College. I am quite happy as this is a work in progress. But we will see where we end at Champs and take it from there,” Harrison noted.

The coach described the new JC/Ashenheim Stadium, which was opened on Wednesday at the school, as a blessing.

“It’s a gift that we really appreciate. Any coach who is blessed with such facility is in a good position. It reduces risk of injuries and encourages athletes, so I highly appreciate it and I want to add my thanks to the Ashenheim family and those who contributed to this worthy cause and made it happen. We have already started training on it and have already started to see the difference in terms of the athletes’ performances, so it is a wonderful asset,” he added.