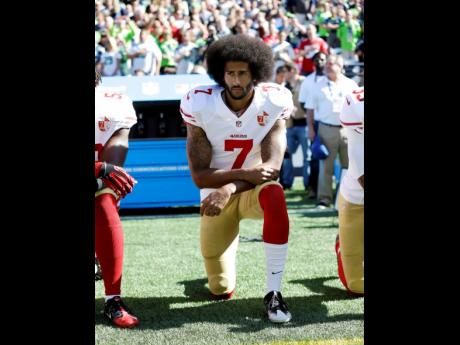 It is hard not to admire NFL players Colin Kaepernick and Eric Reid. Not too many people in this world are prepared to resolutely support a cause that does not directly affect them. Kaepernick and Reid are well-known sports personalities, with the fame and fortune that make it unlikely that they will suffer from the police brutality and racial inequality that they decided that they would take a stand (or kneel) against a couple of years ago. In Harper Lee’s classic novel To kill a mockingbird Atticus Finch told his children that real bravery is knowing you are licked before you begin but going ahead anyway.

By that definition the two were brave. They not only took on the powerful NFL but they also knew that their actions would earn them the wrath of a wide cross section of the American public. Even the president came out and blasted them publicly. As a result of their actions, they were blackballed by the NFL and couldn’t land a job in any of the NFL teams. The two demonstrated real cojones by deciding to take the NFL to court for colluding against them.

I was among many who were surprised, flabbergasted even, when news came through last week that the NFL and the two had decided to settle their case out of court. Nobody expected this and now the settlement has thrown up some interesting side issues. Both parties have signed confidentiality clauses that effectively prevent them from revealing what the details of the settlement are, which only makes this story more fascinating. By deciding to not allow the case to go to trial, and to pay these two whatever the sum is, the NFL has effectively bought their silence. When parties decide to settle matters out of court, it is usually because they both think there is a possibility that they might lose the case. The obvious question then is, why did the NFL feel that there was a possibility that they could end up losing the case if it went before a judge?

To win the case, the lawyers of Kaepernick and Reid would not just have to prove that NFL teams did not want to employ them because of the stance they took, but that their was agreement (collusion) between teams, and possibly the NFL commissioner himself, that they would be effectively sent to pasture.

Collusion is not an easy case to prove. One can’t help but believe that there was some embarrassing information that would have surfaced if the case had gone further. The NFL is a billion-dollar industry, but they do not throw away money willy-nilly.

Despite settling out of court, or maybe because of that, the question will forever remain as to what did the NFL have to hide. Are there some sinister text messages that are out there with NFL owners, in private conversations, saying damning things against the two? It will be interesting to see what ­happens when the next NFL ­season gets under way.

Reid has already signed with the Carolina Panthers, but the question remains whether any of the teams will touch Kaepernick with a long stick.

If he is not signed and his days as an NFL quarterback are over, did he really ‘win over the NFL? And if he does get signed by an NFL franchise, will he continue to kneel for the national anthem? If he comes back and does not kneel, did the NFL, in effect, buy out his principles?

Who are the real victors here? Kaepernick and Reid were undoubted heroes for taking the stance they took. It is almost Mohammed Ali-esque how they took on a system at great personal sacrifice to themselves.

The difference is that while Ali in time enjoyed universal respect for his position, history may not be so kind to Kaepernick and Reid. The two were well within their rights to seek compensation for being unfairly left out of the NFL for two seasons, but by accepting money and terms, which they have agreed not to disclose, one school of thought will remain that they sold out for money.