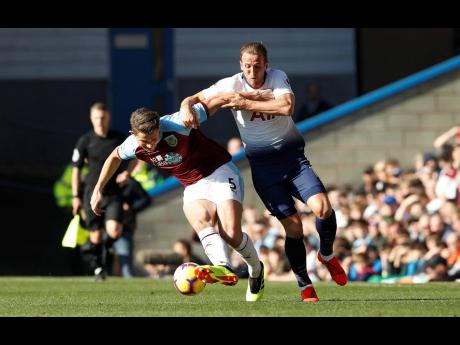 The Tottenham coach angrily squared up to referee Mike Dean after the final whistle of a 2-1 loss at Burnley yesterday, venting his frustration over a decision that led to the hosts’ opening goal. It was a rare public display of anger from Pochettino, who quickly acknowledged that his emotional outburst was linked to the realisation that this loss may have ended Spurs’ hopes of catching leading duo Liverpool and Manchester City.

“We cannot think now of being a real contender. It is a massive opportunity lost for us. ... When you feel so disappointed and upset, you make some mistakes. We made some mistakes on the pitch, and I made some mistakes afterwards on the pitch,” Pochettino said. “There were crossed cables inside my brain. It was weird and strange and has not happened before in 10 years. Some stupid things happen and you react.”

Pochettino’s anger stemmed from Chris Wood’s opening goal in the 57th from a disputed corner, with the coach and his Tottenham players arguing that the ball had gone off a Burnley player and it should have been a goal kick.

Pochettino immediately argued with the fourth official after that goal and then squared up to Dean after the final whistle during a heated argument with the veteran referee. Pochettino initially walked away from the exchange but seemed to reacted angrily to something Dean then said and stormed back, putting his face inches away from the referee’s before Pochettino’s assistant intervened.

Tottenham had been boosted by the early return of Harry Kane from an injury, but even a goal from the England striker wasn’t enough to prevent a damaging loss. Ashley Barnes scored an 83rd-minute winner for Burnley as Tottenham missed the chance to pull within two points of City and Liverpool, which can now go eight points clear of Spurs by beating Manchester United on Sunday.

Kane, playing his first game since injuring his ankle on January 13, showed his usual scoring touch when he netted an equaliser in the 65th, running on to a long throw-in and beating goalkeeper Tom Heaton by poking a low shot inside the far post.

But Barnes restored Burnley’s lead when a shot by Johann Berg Gudmundsson ended up in his path at the back post, leaving the striker with a simple finish.