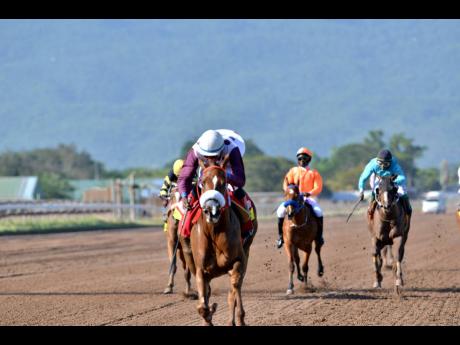 Walker’s feature-race sweep included 3-5 favourite DRUMMER BOY, aboard whom he made all in the fifth event to land the ‘Lindy’ Delapenha Memorial Trophy at a mile, the second of four winners on the 10-race card for champion trainer Wayne DaCosta.

FATHER PATRICK, the 3-5 favourite, was awesome, tracking UNIVERSAL BOSS to the three and a half furlong point before taking control entering the straight. The speedy gelding stayed on strongly under Walker’s urging to thwart late-charging TOONA CILIATA by a length, stopping the clock in a solid 1:12.0.

DaCosta, who won his 13th consecutive title last season in a heated battle with rival Anthony Nunes, jumped from eighth in the trainers’ stakes standings to fourth with a stinging four-timer.

DaCosta opened the card with 1-2 favourite BRANDY, who made all at seven furlongs with Anthony Thomas.

Walker sealed a third winner for himself and DaCosta with LADY BLUE in the Hot Line Stakes, joining Dane Nelson and apprentice Christopher Mamdeen on 11 winners.

Despite reporting sparingly trained off a three-month lay-up, LADY BLUE proved too good for rivals, making all the running from post-position one, winning the fillies-only event in 1:13.3.

Nunes saddled two winners, TOP EAGLE and WESTERN WHEELS, in the fourth and 10th, respectively, to maintain his lead atop the trainers’ standings ahead of Gary Subratie, Richard Azan and DaCosta.