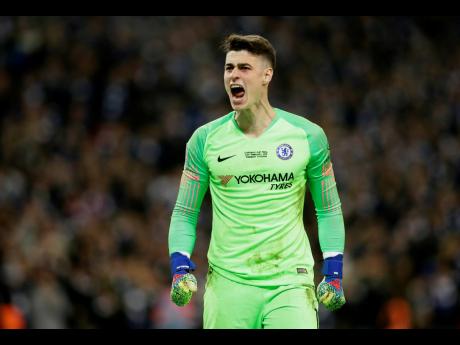 AP
Chelsea goalkeeper Kepa Arrizabalaga reacts after stopping a shot from Manchester City’s Leroy Sane during a penalty shoot-out at the end of the English League Cup final match against Manchester City at Wembley Stadium in London, England, yesterday.

Chelsea goalkeeper Kepa Arrizabalaga was beaten four times in the penalty shoot-out to enable Manchester City to successfully defend their League Cup title after the Spaniard undermined manager Maurizio Sarri, by refusing to be substituted during yesterday’s final.

Nearing the end of extra time, with the game locked at 0-0, Kepa appeared troubled by hamstring problems and Sarri tried to replace him with Willy Caballero.

But Kepa, the world’s most expensive goalkeeper after joining Chelsea in August for €80 million, would not leave the field – wildly indicating to the touchline that he wanted to continue.

Publicly humiliated, Sarri was furious and initially headed down the tunnel before returning just in time for the end of 120 minutes.

In the shoot-out, Kepa made only one save from Leroy Sane, and Sterling completed a 4-3 victory on penalties to keep City in contention for a quadruple.

“I’ve never seen it (before),” City captain Vincent Kompany said. “I wish I could do it every now and then when I don’t want to get subbed off.”

The insubordination exposes the player power that has appeared to often cause problems for Chelsea managers. It leaves the 60-year-old Sarri without a trophy in his career, and Kepa’s defiance adds to the manager’s problems with Chelsea down to sixth in the Premier League.

“Luckily, I never had to go through this,” said José Mourinho, who Chelsea fired in 2015, citing “palpable discord” with his players. “The goalkeeper wants to show his personality, his confidence, wants to show that he is there and wants to be at the shoot-out and make saves - and I like that.”

But Mourinho, covering the match in Spain for the Internet streaming service DAZN, said the situation made him “really sad.

“I don’t like that he leaves his coach and the assistant coach in a situation of great fragility,” Mourinho said, “and his teammate, who was ready to enter the match, and who in the end saw himself in the middle of a problematic situation that had nothing to do with him.”

The flare-up undermined how Sarri had set up his team to successfully thwart City two weeks after a 6-0 loss in the Premier League. City did lose top spot, after Liverpool drew 0-0 at Manchester United.