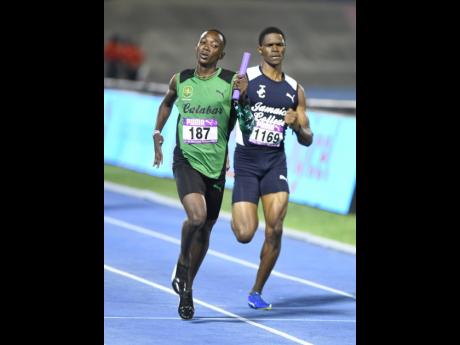 In his last race for St Elizabeth Technical High School (STETHS), Jauvaney James produced a stunningly well-paced effort in the 4x800 metres at the 2018 Penn Relays. Though victory and the meet record went to a fine Calabar High School team, James took STETHS under the old record with the fastest 4x800m relay leg ever by a Jamaican schoolboy – 1:48.4 seconds.

Jamaica College (JC) led from the start, with Fabian Campbell, Class Two athlete J’voughn Blake and Munro transfer Rushane Fullerton steady. Their captain, Dugion Blackman, ran fervently and covered the ground in 1:49.9. That’s a relay leg most schoolboys would be proud of. However, on a day when Farquharson was brilliant, Blackman was overtaken, and his fine run merely closed a runner-up finish in 7: 32.18 seconds. The JC time also bettered the meet record of 7:32.76 set by St Jago High School in 2017.

The blazing effort by Farquharson makes him the favourite for the Class One 800 metres title next month at the ISSA/GraceKennedy Boys and Girls’ Athletics Championships. All things being equal, he may have a chance to challenge the 31-year-old mark of 1:48.84 set by Sherwin Burgess of Vere Technical and to add to the Class Two record of 1.51.26 he set in 2017. He set that mark in the first round and went on to win the final.

He and Blackmon were third and fourth last year, with Tarees Rhoden of Kingston College also in the final.

James won that race to bring his total of Champs gold medals to seven.

At the Gibson McCook Relays, 2017 Class Two silver medallist Rhoden anchored the third-placed Kingston College team with a run clocked in at 1:50.6 seconds.