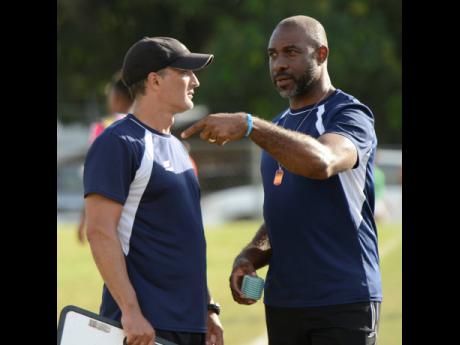 Since the arrival of Brazilian coach Luciano Traina Gama, just over two weeks ago, Montego Bay United (MBU) have made what could be considered a turn around in the Red Stripe Premier League, picking up five points from three games. This includes Sunday’s come from behind 2-1 win over Cavalier at WesPow Park.

Despite the results, MBU still occupy one of two relegation spots, sitting in eleventh place with 24 points - one above Reno at the foot of the table and three behind 10th placed Harbour View.

The Brazilian was pleased with the win but is already looking forward to next Sunday’s western derby against Reno, which he underlined as a crucial encounter to their survival hopes.

“The feeling is good for the result. To come back from one down is very difficult because of the expectations as everybody knows we need the three points to save the team,” Gama told The Gleaner.

“It was normal that they started a bit nervous, which resulted in the goal (conceded). However, I’m very happy with the reaction, they never gave up. It was important for the team to get all three points,” Gama added.

The coach, however, warned that the effort must carry over to their next assignment, noting that a negative result will severely dent their chances of staying in the top flight.

“If we don’t win that game (against Reno) we are going to be in more trouble next week. We must think game by game as each game is a final. We must fight each game, because we know the consequence one bad result can have on the next game,” Gama said.

In their previous two games this season, Reno and MBU played to draws, tying 0-0 in October, before playing out a 1-1 draw in early December.

On Sunday, Kaheem Parris gave Cavalier the lead just three minutes into the encounter. However, Nazime Matalie-Grant levelled the scoreline in the second minute of stoppage time before the break slotting home a clever pass from Dino Williams, who scored a spectacular bicycle kick to give is team all three points, after earlier seeing his penalty saved in the 72nd minute.

Gama’s boys are in for a tough stretch, with Arnett Gardens, Portmore United and Waterhouse laying in wait, after the Reno clash.