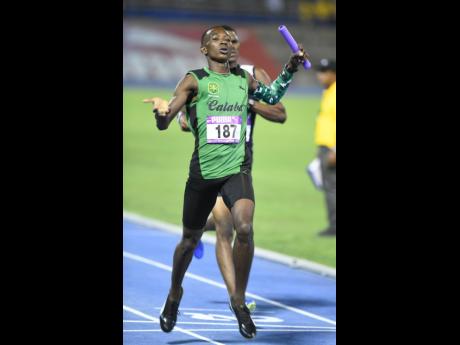 Ricardo Makyn
Calabar’s Kimar Farquharson celebrates after anchoring the team to victory in the boys 4x800m relay open final at the Gibson McCook Relays held at the National Stadium on Saturday, February 23, 2019.

Calabar High School, Jamaica College (JC) and Kingston College (KC) can all run significantly faster in the 4x800-metre relay. This trio put on a great show last Saturday at the 43rd Gibson McCook Relays with the first two surging past a fine record set by St Jago High School in 2017.

To everyone’s delight, that race delivered on its potential for entertainment.

Kimar Farquharson earned pride of place with a stunning 1 minute 47.9-second anchor leg to take Calabar to a record time of 7 minutes 31.71 seconds. The insertion of Devannah Gayle, who closed a Calabar medley relay with a 1.51.7 at last year’s G.C. Foster Classic, gives Calabar the potential to match its splendid Penn Relay record of 7 minutes 26.09 seconds.

Last Wednesday, JC officially opened its superb Ashenheim Stadium. At Gibson McCook, with Dugion Blackman closing in 1.49.9, the JC quartet dipped past that St Jago record as well, at 7 minutes 32.20 seconds. JC could accelerate as well. Rushane Fullerton, a Munro College sixth-form transfer to 189 Old Hope Road, circled his two laps in 1.54.6. Last year, while he resided at Munro’s city on the Malvern hill, he set a personal best of 1 minute 51.12 seconds behind Farquharson and KC’s Tarees Rhoden at the Carifta Trials.

KC’s source of possible improvement became evident at Gibson McCook at the end of the medley relay. That is where Kabiba Mills did his job in 1 minute 52 seconds flat.

Mills is improving fast. At the Western Relays on February 9, the split speed gun caught him at 1 minute 53.9 seconds on the winning KC 4x800m relay team.

He would supplant one of the 1-minute 55-second leg KC produced in Saturday and perhaps those wise Purple heads will put in the tall ex-Holmwood boy Malique Savoury.

Added to that bit of track geek guesswork, all three teams could improve as training loads lessen and as the boys get sharper as the season progresses.

This is all theory and life can often take other directions, but it’s good news for Jamaica. Farquharson’s impressive split time has fans thinking about the Boys’ Champs record of 1 minute 48.84 seconds set in 1987 by Sherwin Burgess of Vere.

Blackman, Fullerton and Elliot possess the ability to guarantee the first sub-1.50 Champs race since 1990.

The tide is rising, and hopefully the ancient national junior and senior 800-metre records will, in time, be washed away.

This is no disrespect to theholders of those records, Excelsior’s indomitable running man, Neville Myton, and the sweet-stepping Seymour Newman. Schoolboy Myton ran 1 minute 46.5 seconds en route to the 1964 Olympic team on a dirt track. Thirteen years later, on midsummer’s night in Helsinki, Newman dashed through the distance in 1 minute 45.21 seconds.

That was 1977. There are hard- core tracks fans who can’t even remember the Olympic medals won by Arthur Wint in 1948 and 1952 and by George Kerr in 1960. The World Indoor Championships gold medal secured by Clive Terrelonge in 1995 is covered in memory dust too. Perhaps these young boys will open a new chapter.